After a lot of thought, I have decided to blog about my upcoming journey with breast cancer. As you might expect, this will include details about my boobs and medical procedures.  If you think that sharing this information borders on “TMI”, then my cancer updates might not be for you.  If this is your first visit, you can catch up on my story by reading these earlier posts:

1) Why I am Blogging About My Cancer Journey 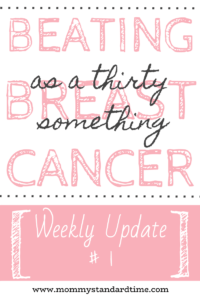 Well, last week turned out to be a very busy week.  I had three separate “meet and greets” with the doctors who will be guiding me through treatment.  It didn’t all go according to plan and I ended up with a bit of a scare. Here’s what happened:

Genetic Counselor – Over a week ago, on Thursday the 5th, my nurse navigator from the cancer center called me to introduce herself and check in with me.  Since this was the first I had heard from anyone since my OB/GYN called with the news that I have cancer, I had a few questions.  We talked for about half an hour and she encouraged me to think about having genetic testing done to check for the BRCA1 and BRCA2 genes.  This could impact my surgery decision.  So after hanging up with my nurse navigator, I contacted a dear friend (who is a genetic counselor) and was able to ask her a few questions. I decided to move forward with the testing and made an appointment with a counselor in Portland for the next morning.  This was super lucky since it was the day before snowpocalypse continued, so we were able to get in, get out and get that testing underway.

Breast Surgeon – On Tuesday, I met with my breast surgeon.  We started by discussing some of the specifics of my tumor, and I am just now realizing that I haven’t yet shared those details with you.  So here’s what I know:

So really, the pathology doesn’t show anything too super scary.  I was feeling like this was all doable.  We started talking about surgical options and I told her that I felt like, due to the location of the tumor and how much of an impact the tumor had already had on the appearance of my breast, I didn’t feel like I wanted to mess around with breast conservation surgery (lumpectomy).  BUT, I am open to their professional opinions. After a few more references to my tumor, the surgeon wanted to examine my breast for herself.  After the exam, she told me that she didn’t like the look of the skin near my tumor (so when I say “skin” throughout this post, we’re talking about the nipple and areola. I will continue to use “skin” to hopefully save you a few cringes later on.)  She wanted to do a biopsy in order to make sure that the skin wasn’t involved in the cancer.  SURPRISE!

Once we got to the procedure room, I was met by my wonderful mammogram technician from last month who, as it turns out, splits her time between surgery and mammography.  They put up one of my mammogram images so that I could see one of the other reasons why the surgeon wanted to do this biopsy – she had noticed skin thickening on my left breast that wasn’t on my right. I have decided to overshare and just show you the image. Keep scrolling if it’s TMI for you. The right breast is on the left. You can see the white mass of the tumor and also the thicker (whiter) skin. 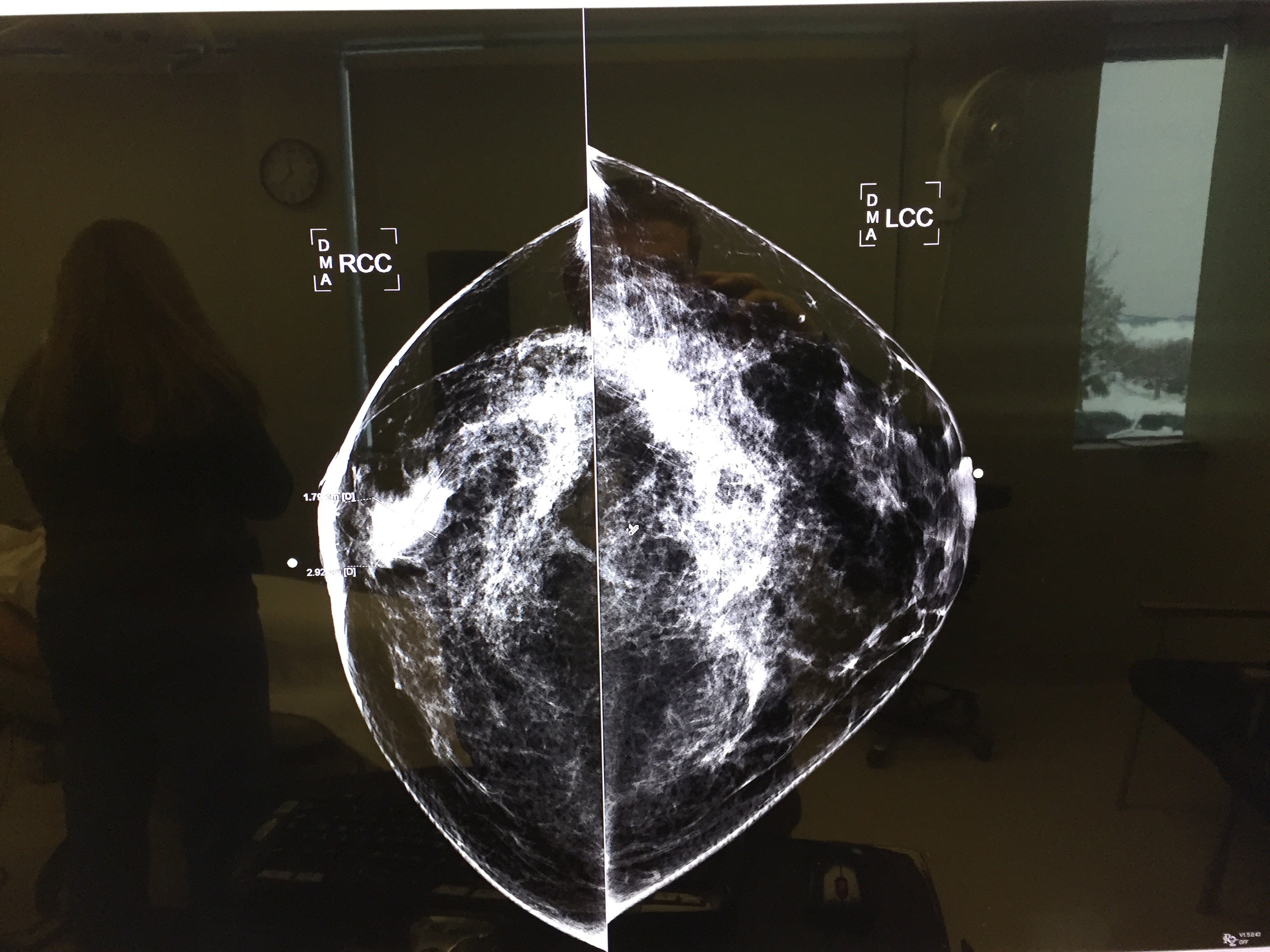 She told me that this could just be reactionary since my tumor is so close to the surface of my skin.  However, this could also mean that there is cancer in my skin.  Since this would drastically change my treatment plan (I might need to have chemo before surgery), we needed to find out if the skin was involved.

So, I had a punch biopsy.  It was as uncomfortable as you could probably imagine, but not unbearable.  On my way out I scheduled a follow-up appointment in two weeks, by which time I should have my genetic testing results, skin biopsy results, and I will have had my “meet and greets” with the radiation oncologist and medical oncologist.  By my next appointment with the surgeon, we will be able to talk treatment plan.  They also sent me over to the lab for some blood work on my way out.  Before I left, though, they gave me a book to read to the kids at an appropriate point in this journey. 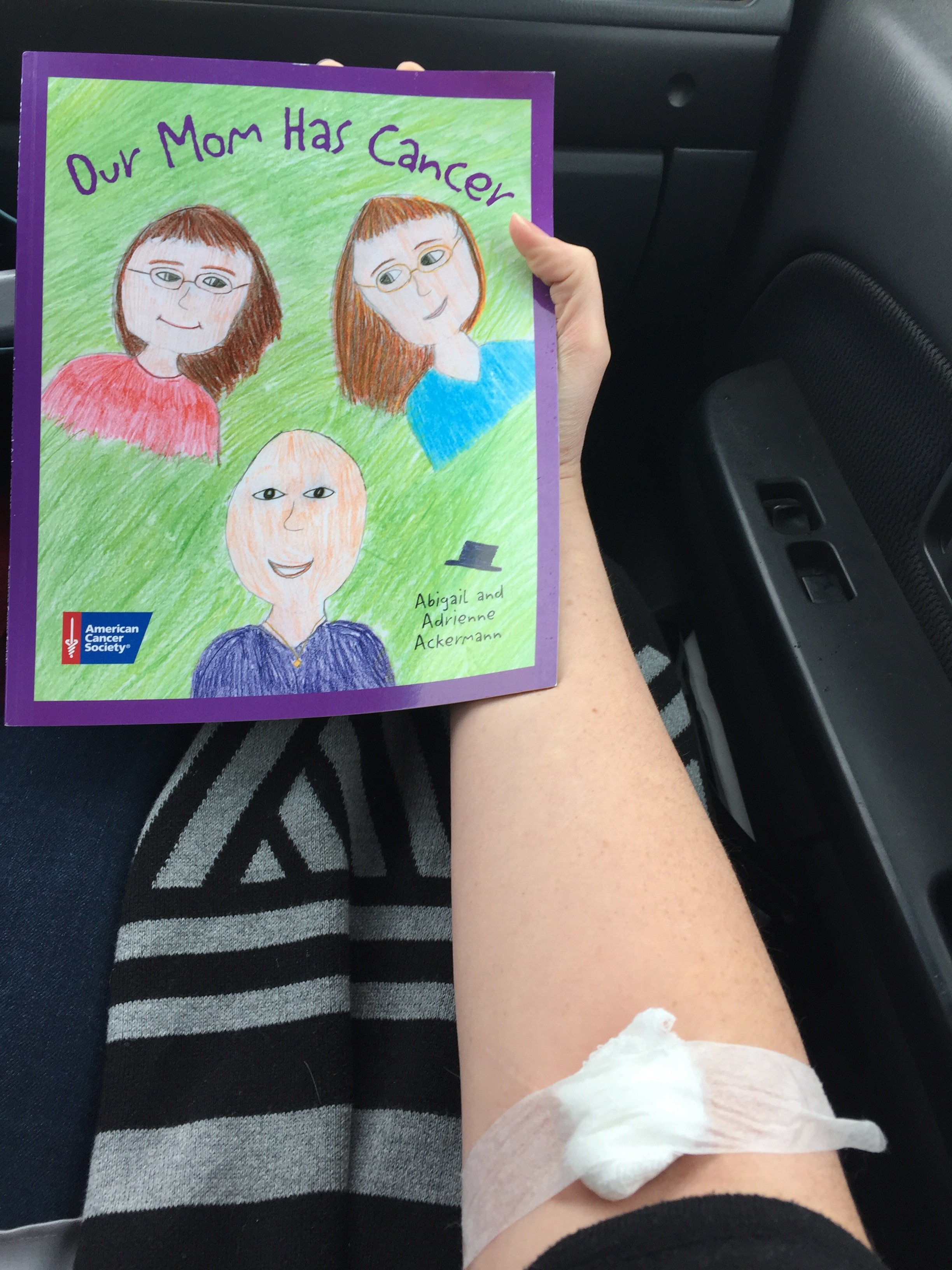 They also handed me a wonderful “care bag” that is made by an organization of breast cancer survivors in our town.  It was touching to receive this gift from women who, although they have no idea who I am, are keenly aware of what I’m feeling and are thoughtfully sharing gifts that I didn’t even know I needed.  What a blessing.

Radiation Oncologist – A couple of days after my appointment with the surgeon, I met with my radiation oncologist.  I wasn’t sure what to expect from this appointment because I am not leaning towards a lumpectomy, which is the main reason for radiation…or so I thought.  The doctor examined my breast and then discussed a couple of scenarios (other than lumpectomy) that might warrant the use of radiation.  This appointment was mostly “if-then” discussion, so I don’t have a lot more to tell you at this point.  One positive from this appointment was he ruled out one of the possible scary cancers that could involve my skin (if the biopsy is positive for cancer); he confirmed that from the visual exam, he could tell that I do not have inflammatory breast cancer.

My wonderful nurse navigator was with me and Mr. Blue Eyes before, during, and after the appointment, taking notes and answering my questions of all types. She confirmed that the surgeon had ordered a chest x-ray after our meet and greet on Tuesday, so MBE and I ran over to the hospital and took care of that while we were there.

Medical Oncologist – On Friday, I met with my medical oncologist.  This appointment was also mainly a “meet and greet”, but it wouldn’t be a breast cancer meet and greet without stripping down to the waist and letting her check out my boob.  After my exam, we talked about my pathology results again and she confirmed that I will be having chemo.  We just don’t know if it will be before surgery or after surgery. She also briefly confirmed that I will be taking Tamoxifen (hormone therapy) after my other treatments.  The big scare came when she pulled out another paper and showed me my skin biopsy results.  She told me that the biopsy came back positive for cancer cells.

I tried to pry some more information out of her, but she said that it was too early to discuss the implications of this result.  I interpreted this to mean that this could either be really, really bad (metastatic cancer) or just kind of bad (like Paget’s disease) and they weren’t sure which it would be.  Needless to say I was seriously freaking out by the time I got home.

LUCKILY, my hero (my dear, dear surgeon) called later that afternoon.  She told me that she had the biopsy results, but before calling me she had tracked down the pathologist who tested my tissue sample.  She said that, although my biopsy did come back positive for cancer cells, she and the pathologist feel that the cancer cells are actually cells from my tumor and NOT proof that the cancer is spreading (metastatic cancer) or that the skin is involved in some other way (like Paget’s disease).  This is based on the fact that my tumor is SO CLOSE to the surface, and also based on the location of the cancer cells in the actual sample. I am cautiously optimistic that this is the case and will put my trust in the professionals.

What caught me the most by surprise was how EMOTIONALLY draining these appointments would be.  We weren’t discussing anything that I hadn’t already heard or read about, but finally sitting in front of the doctors who will get this journey started was a bit of a wake-up call.

Yes, you do have cancer.

Yes, you will be having surgery.

Yes, you will be having chemo.

Yes, this really is your life!