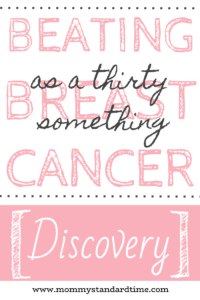 After a lot of thought, I have decided to blog about my upcoming journey with breast cancer. As you might expect, this will include details about my boobs and medical procedures.  If you think that borders on “TMI”, then my cancer updates might not be for you.  🙂

Before I tell you about the day I found the mass in my breast, we need to backtrack about 16 months, to before Ladybug was born. 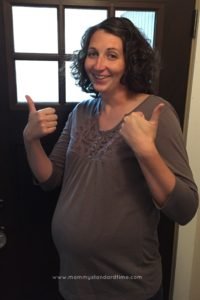 As my body was preparing for child birth, I noticed that my left breast was doing the usual thing (growth, discharge, etc.) but my right breast definitely wasn’t.  I chalked it up to the usual “my-body-is-going-crazy” aspect of having a baby.  Seriously, the body does some crazy stuff during pregnancy, so it didn’t shock me that one boob was different than the other.

There really wasn’t much surprise after Ladybug was born that she did not prefer my right side.  The nipple wasn’t shaped as well as the left side and it was harder for her to latch on.  Since she wasn’t latching on, the milk wasn’t coming in.  Since the milk wasn’t coming in, she wasn’t interested in latching on. Vicious cycle.  So we focused on getting my supply up in my left side (a task in and of itself after a C-Section) and tried a few things to stimulate milk production in the right side.  Ultimately, our efforts were fruitless  and I was pretty bummed about my body not doing its job as well this time around. 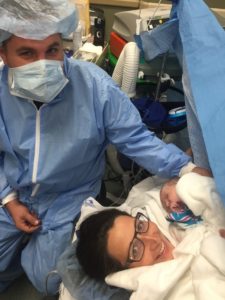 I mentioned my frustration to my doctor at my first post-op appointment, so she checked things out.  She said that she thought she felt a slight bump directly under my nipple and thought we should check it out on ultrasound to see if it was a significantly clogged duct or if there was something else going on.  I didn’t think much of it, so Mr. Blue Eyes, Ladybug and I went to the hospital the next day or so for an ultrasound.  When they handed me my paperwork for the technician, my stomach sunk when I realized that the order said “lump in right breast”.  I asked MBE: “Should I be more worried about this?”

I was a little nervous through the ultrasound, and it didn’t help that it was an unpleasant experience.  Let’s just say that since the mass the technician was looking for was DIRECTLY under my nipple (not the areola…the nipple), things got more than a little uncomfortable.  After what felt like an eternity ( about five minutes), the technician informed us that she didn’t see anything.  Not a single clogged duct or any indication that my breast was trying to produce milk.  She said she would have expected SOMETHING. 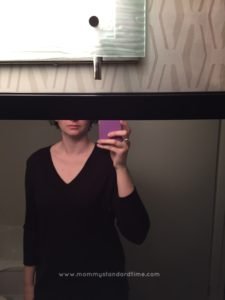 So things were left at that.  I had a baby to feed, so I focused on my left side.  I nursed Ladybug for a full year with one boob (I figured that’s basically what moms of twins do, so it should work for my one baby).  I assumed that my body was just a little broken and made light of it.  I wore scarves, loose tops, and dark colors to hide my lopsidedness and looked forward to the day when I would be done nursing and my boobs would finally go back to normal. (Sidenote: That picture was in a hotel with a super-low mirror.  Tall girl problems!) Slowly but surely, in the three months from Ladybug’s first birthday to now, my left side has decreased in size to more closely match the right side, but it is still significantly more healthy looking than the other one.

On my recent birthday, I decided to treat myself to a longer shower while Ladybug napped.  During this shower, I noticed the continued difference between the two sides.  I even noticed that my right side now had some dried discharge like I had on the left breast prior to Ladybug’s birth.  I chuckled to myself that my right side was a little late to the game and started taking care of it.  While doing this, I noticed a hard lump to the right of my areola.  My stomach sunk.  I immediately remembered our little investigation into the small bump under my nipple a year ago.  Had it grown??  Like a TUMOR??

I grabbed my phone immediately after my shower and set up an appointment with my OB/GYN.  The earliest they could see me was December 29th (it was December 13th).  Since I couldn’t do anything about the wait, I moved on with my birthday festivities and tried my best to forget about it. 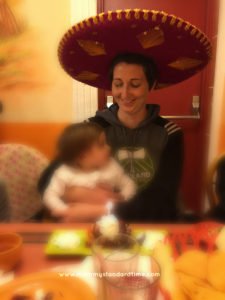 I tried to reassure myself that it was probably just some sort of ramification from the breast’s failed attempts at producing milk. Maybe it was an infection that would be zapped by antibiotics (once I finally saw my doctor).

Later that week, on Friday morning, I noticed what looked to be red streaks around the area of the bump.  Not wanting to face the weekend with an infection that was flaring up, I called my doctor to ask if I could see a different doctor or if there were any cancellations.  They said they could see me later that morning, so I had Mr. Blue Eyes come home from work to stay with the kids.

As expected, my doctor was concerned by what she felt.  She said the redness was definitely not an infection and she wanted me to have a mammogram ASAP.  She sent me over to the hospital where I had my first mammogram (no big deal, by the way) and a follow-up ultrasound (yes, another ultrasound around on and around my dang nipple).  More about the testing and diagnosis in my next post…