After a lot of thought, I have decided to blog about my upcoming journey with breast cancer. As you might expect, this will include details about my boobs and medical procedures.  If you think that borders on “TMI”, then my cancer updates might not be for you.  If this is your first visit, you can catch up on my story by reading these earlier posts:

1) Why I am Blogging About My Cancer Journey 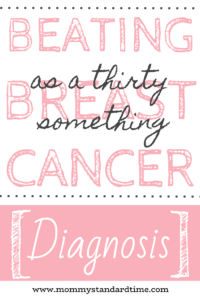 As I mentioned in the last post, my doctor sent me right over to the hospital for a mammogram and ultrasound after she examined the lump in my breast.

At the reception desk of the mammography department, I was greeted by a familiar face from high school.  She said something to the effect of “I’m sorry we have to see each other again on these terms.”  I was taken aback, mainly because this was the first time that I had thought about the fact that this lump in my breast could really be something bad. This was also my first mammogram, so I started to wonder if I should be worried about that as well.  I had heard that some women dread going for their mammograms, so I wondered if it would be uncomfortable.

Luckily, I didn’t have much time to borrow trouble because the technician came to pick me up.  She was absolutely wonderful; she was so kind and gentle, making sure that I was comfortable every step of the way.  She asked me a few questions for my chart, more things that made me realize that this could be the start of a big deal.  Although I got a little nervous at that point, I was still optimistic that this was just some sort of cyst.

The technician told me that the radiologist was on site that day and that I would have all of my results (both the mammogram and the ultrasound) before I left.  After taking two rounds of pictures, I was left alone with my growing anxiousness while the technician went over my results with the radiologist.  The two of them returned and the radiologist explained that there was an area of concern on my images.  The good news was that it was only the one area that we had already been suspecting. Nothing else of concern showed up on the mammogram.

The radiologist was a great guy who took the time to explain things well.  He first said that he looked back at my ultrasound from a year ago and confirmed that nothing showed up on that round of imaging.  He said that now I needed to have an ultrasound to get a different picture of this lump.  He explained that the results of this imaging would send me down one of two paths: The first would be that the ultrasound would indicate something like a cyst, which would need follow-up in around six months; the second path would be a biopsy.  He gave me that compassionate look that told me (without words) what he thought the path might be.  He asked me if I had any questions and my nerves finally made it to my tear ducts.  I told him that I hadn’t really had time to think about it, that everything was moving so fast.

Before going to radiology, I called Mr. Blue Eyes and tearfully confessed how nervous I was.  After a quick conversation, we both clung to the hope that this was still a cyst.  Path one.  We were hoping for path one. 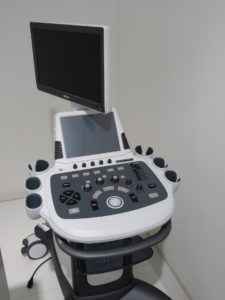 So I had the treat of another unpleasant breast ultrasound.  As opposed to my ultrasound the previous year, I noticed that the technician wasn’t as quick to reassure me as the previous technician had been.  Since she was so quiet, I looked at the screen and noticed a big black space of nothingness in the center.  I didn’t make any assumptions about what that could mean because ultrasounds are so hard for me to read.  The technician then had me lift my armpit and she checked on my lymph nodes.  This wasn’t promising.

The technician retrieved the radiologist and they pulled up one of my ultrasound images.  Sure enough, there was that big black space of nothingness I had seen before.  It was pretty large.  He pointed at it and said, “This is the lump.  This is concerning.”  So I was going down path two; the radiologist told me that I would have a biopsy on Monday.

Again, my radiologist had that super-compassionate look on his face and he asked me if I had any questions.  I remembered a comforting statistic from the internet that 80% of breast lumps aren’t cancerous, so I asked:

“Based on what you’ve seen and comparing it to other lumps that have gone for biopsy, what are the odds that this could be benign?”

I was hoping for a comforting answer based on that statistic, but didn’t get one.

He said, in the most compassionate of ways, “It’s not looking good. I am concerned.”

He told me that he doesn’t like to sugar coat things, but he did say that there are some scary-looking masses that do end up being benign.  So I was right, the big black space of nothingness looked as scary to the doctor as it did to me. But I still had something to hope for.  There was a chance it could be benign. I clung to that hope through the very long weekend that followed.

When I started this post, I had planned to include the biopsy, but this is getting pretty lengthy.  And, really, the biopsy probably deserves its own post. <<shudder>>  So “Diagnosis: Part Two” will be coming soon.