This week FLEW by in a blur of appointments!

Monday was my monthly visit to the oncology nurse practitioner, a port flush, and my Zoladex shot at the cancer center.  This takes place upstairs at the cancer center and, since radiation is downstairs, I hadn’t seen this group of staff members for a month.  It was fun to see their reaction to my new ‘do.  They always know how to make a patient feel good!  My appointment went fine.  The only thing that I mentioned to the nurse practitioner was that I have been having “zings” of pain in my right boob-to-be (where the radiation has been focused).  She agreed that it was probably due to radiation and offered me some painkillers.  I didn’t take her up on that offer because I don’t like the way I feel on pain meds, and the “zings” of pain don’t last long enough to warrant painkillers.  So we left it at that.   After the appointment I went into the chemo room and waited for my port flush.  Basically, they access the port like they do for chemo, but they just push a few injections into it and then remove the port needle.  Super easy.  After the port flush I went into an exam room for my Zoladex shot, which was the same as usual (a big ol’ needle that requires lidocaine beforehand).

What I love about the cancer center is that,even though I am being seen in different areas of the building, all of the providers know what I’m up to on any given day (woo hoo for technology!).  On my way upstairs, one of the gals from downstairs caught me and told me I should check in at radiation on the way out to see if they could squeeze me in (my actual appointment wasn’t until later in the afternoon).  It turned out that they couldn’t squeeze me in when I was done upstairs, but it was sure nice of them to offer!  So I went home after my morning appointment and came back for radiation.  Monday was a lot like every other day, but they had to do some imaging to make sure that everything is still lining up the way they want after five treatments.  All this meant was that they put the x-ray doo-dad on the radiation machine before starting my usual cycle.  The treatment was still the same.

On Tuesday I went for a check-up with my breast surgeon (the one who performed my mastectomy…not my plastic surgeon).  She said everything is looking great.  She also had some optimistic conjecture about what might happen with my lopsided boobs-to-be after radiation.  She thinks that if the skin on my left side had been stretched enough at one point to be the size of my right side, she is optimistic that it probably won’t contract too much during radiation (since my left side is not being treated with radiation).  I hope that’s the case.  I’m hoping my implants won’t be delayed because they have to slowly re-expand my left side like they did initially.  I also talked with her about the zinging in my skin.  Since one of the areas of discomfort is under my arm pit, around the area where my sentinel lymph node was removed, the surgeon said it is possible I am still experiencing zings from that.  She also said it could very well be related to radiation. After I finished my check-up with her, I went home for a little while and then came back for radiation.

Wednesday was my favorite day of the month.  Facial day.  Luckily the radiation department was able to give me a different time for that day, because my facial appointment conflicted with radiation.

By Thursday, Ladybug was exceptionally clingy.  These double appointment days with all of the coming and going were really starting to bug her!  Luckily I just had the one trip to the cancer center for radiation that day.

Friday was a one-appointment day also, but Fridays are the day that I see the radiation oncologist for a check-up after my treatment.  After the zapping, I stayed on the table with my gown open so that the doctor could come and check out my skin.  He said everything looked fine.  Then I got dressed and met him in the exam room so that we could chat about things.  I told him how that morning I had noticed the skin on my right side turning bright red after the shower while the left side looked much less red.  He had a fancy description for why that is the case and it made a lot of sense at the time, but I don’t remember what it was exactly.  Basically, my radiated skin is reacting differently to the heat from the shower than the rest of my skin.

I also talked to him about the zinging under my skin, and he had a technical explanation for that as well.  From what I can remember, there is just a lot of inflammation and irritation happening in this radiation process, which can manifest as these short, sharp pains instead of continuous pain.  He said that I could try over-the-counter pain relievers since it doesn’t sound too severe.  At the end of the appointment, he said that everything I am experiencing so far is completely normal and expected.  That’s good news!  My body seems to be responding well to radiation so far.

So that was my week of appointments.  Now I’ve got to tell you about my hair growth.  Ladies and gentlemen…I have EYEBROWS!  Now, I’m not talking about eyebrows in the traditional sense of the word.  I’m talking about the SHADOW of eyebrows.  (Please excuse my makeup-free selfie…first thing in the morning is one of the only times my eyebrows aren’t “enhanced”). 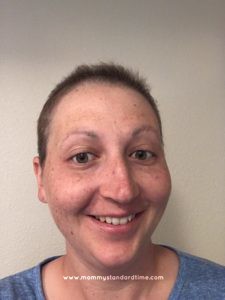 My hair is starting to grow back in and it is leaving a faint shape of eyebrow on my face.  It is SO much easier to draw them in when I have a little outline to follow.  Even more exciting (in my opinion), is that I have the cutest little baby eyelashes growing in as well.  They are still too short for mascara of any kind (I would probably poke my eye out if I tried).  I think the reason all of this is so exciting is not because I will look more “normal” (since I have been able to make decent accommodations for my lack of hair), but it is comforting that I won’t have to make these accommodations forever.  There has always been this underlying stress that my eyebrows, eyelashes, or even hair wouldn’t grow back at all, since I had heard horror stories.  Now I can just relax and wait for everything to grow, now that I know it actually will!  I’m still not convinced I will have the same hair color or texture, but that’s a worry for another day.

I am still struggling with being out of shape – the aches and pains of carrying around extra weight are a bummer.  Plus, any time I “overdo” it physically, I end up with pain in my expanders (different from the zinging) and super sore muscles.  It really doesn’t take much for me to overdo it. I ended up limping for most of the early part of this past week from doing an at-home workout video that was great before cancer but is apparently WAY too much right now. I guess I just need to start a little slower and be patient.

Yes, I can get annoyed with my broken body sometimes.  But then I remind myself that I am ALIVE and that I WILL be alive for many years because I am going through all of this aggressive treatment.  I am one of the lucky ones and for that I am grateful.