It was a relatively routine and uneventful week in my cancer world.

Radiation has become very routine.  I have now memorized the Oil Can Henry’s-esque numbers that the radiation therapists read to each other as they get me lined up on the machine.  I also don’t have to count the buzzes anymore…I can tell where I am in the treatment based on where the machine is lined up.  I also have gown-wearing down to a science.  One thing the staff has taught me about gowns (if you ever have to get into a gown on a regular basis and the staff doesn’t give you this tip):  Instead of wasting your time tying the gown, just pull one of the upper strings over the opposite shoulder and hold it.  There’s enough fabric to keep you covered in the back.  Am I just late to the party?  I never thought of doing that!  But then again, I’ve never had to wear a gown for such short periods of time before.  I literally have the gown on for 30 seconds before I am in the radiation room, pulling it open in the back in order to lie down on the table. 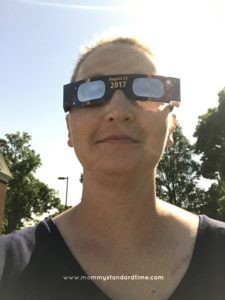 I had a new time for treatment this week, 10:00 am, which I was super excited about.  That is, until I realized what time the peak coverage of the eclipse would be (10:21 in our neck of the woods….which is normally about the time I am leaving radiation).  So my parents and the kids hung out on our church’s lawn (which is just a few blocks from the cancer center), so that I could hurry back down after treatment to watch the eclipse with them. 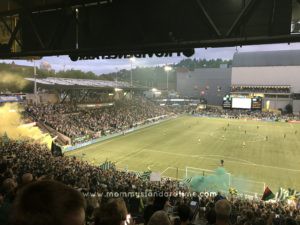 On Wednesday I met another milestone.  My parents are season ticket holders for the Portland Timbers, but I haven’t gone to any matches this season.  Just the thought of the drive, the walk to the stadium, and the standing in the Timbers Army for an entire match exhausted me.  I am proud to say that I had enough energy to be a participating member of the Timbers Army for the win against Colorado on Wednesday.   When I root, I root for the Timbers!

The radiation oncologist checked my skin out again on Friday.  My armpit had definitely been bothering me for a couple of days, so he noticed that redness right off the bat.  He said the armpit is normally one of the first places for irritation because of the friction caused by arm movement.  He also said that he is noticing some redness just starting on my chest and neck.  I really have to watch my sun exposure…it would be like getting a sunburn on top of a sunburn.  So far, my radiation irritation feels just like a mild sunburn, but the armpit burns a little more than other areas.  My Miaderm cream is really helping to soothe the irritation so far.

In other news, my eyebrows have graduated from “outline” status and are now totally acceptable for a trip to the grocery store.  I still prefer to beef them up a little bit, but at least now I don’t feel like my face is completely naked if I choose to not wear makeup.  My eyelashes are growing a bunch, too!  I actually had enough eyelash to coat with a little mascara the other day.  I know these are minute details in the grand scheme of things, but each of these little signs of progress are reminders that my body is slowly getting put back together (and I’m putting this chapter of cancer behind me).

Speaking of putting my cancer behind me:  You might remember my teary day of chemo from a couple of months ago.  As I was talking with the social worker that day, one question she asked me was what I planned to do at the end of my treatment.  She talked about how it was important to do something to acknowledge what I had been through, what I had accomplished.  So I thought about it and I came to a decision.  Our family has been celebrating various occasions with live music since my oldest brother got married.  My dad is a composer and one of his hobbies is creating sheet music of our favorite songs for our family band to perform.  He recruits super-talented former students (now considered adopted family) to round out the band and our family mainly does the vocals.  Why am I telling you all of this?  Well, I decided that the end of my cancer treatment warranted one of our dance parties.  I think it’s going to be a great way to acknowledge that treatment is finally behind me and the rest of my life is ahead of me.  So, anyway….that is another thing that we’ve been working on this week – finalizing the set list for the big night (working title for the party right now is “Cancerpalooza”, but I’ll take suggestions!  Any thoughts??).

So that just about sums up my week.  I’m starting week four of radiation next week.  There is a light at the end of the tunnel!!