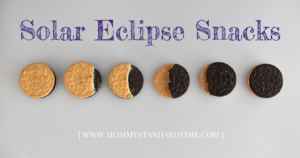 I plan my life around food.  There, I said it.  I truly don’t understand how someone can “forget” to eat a meal.  Now, I can get busy in the morning and not get around to eating breakfast, but I am fully aware of my predicament, by golly.  I measure time based on my meal status.  Let’s say Mr. Blue Eyes wakes up in the morning and suggests a trip to the park…I won’t ask him what time he wants to go to the park; I’ll ask him if we’re going before lunch, after lunch, or if we’re going to eat at the park.

So it only makes sense that my first (and possibly only) post about the Great Solar Eclipse of 2017 is going to be about snackage.  Since the eclipse is happening before lunch, I plan on spoiling our appetites with a few sweets: Eclipse Oreos and Solar Corona Pretzels.

When I went to the store to find supplies for our Eclipse Snacks, I knew I wanted to experiment with Golden Oreos and Regular Oreos.  When I walked into the cookie aisle, it was as if the heavens had opened. 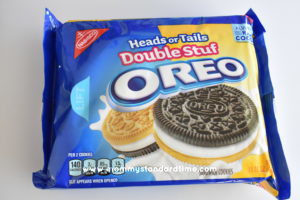 Say WHAT?!  How fortuitous was this??  Since I didn’t have to Frankenstein my own Oreo combination, I was able to get right to work when I got home.  I took out an Oreo and started shave away a little bit of the Golden Oreo side at a time (to represent increasing amounts of the sun being blocked by the moon.) 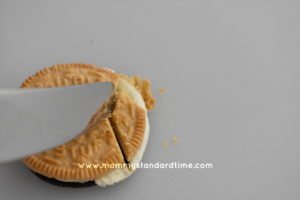 This is done easily with a regular table knife as long as it has some serration.  I just made a V-shaped notch…. 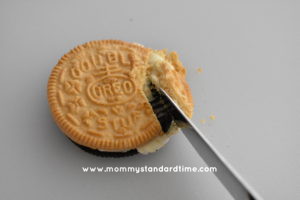 …then pushed off the cut cookie and the filling behind it.  After scraping off any remaining filling, I took the knife and scraped just  a little more cookie out of the middle to make it look more curved. 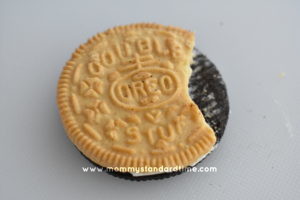 As I made it about halfway, I realized what a sad cookie I would have at totality if I continued cutting away the Golden Oreo; just one half of a regular Oreo with no filling.  Totality deserves a full cookie, don’t you think?? 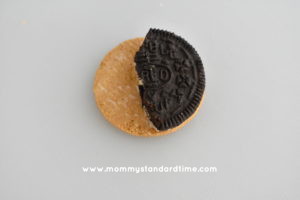 So I flipped it over and started cutting away at the regular Oreo, ending with a full cookie again to represent totality. 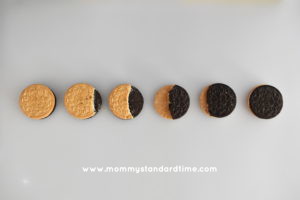 My plan is for each kid to have a set like above so that they can eat each cookie as the eclipse matches.  Whether you are watching the eclipse with kid-friendly eclipse glasses, using a pinhole projector, or streaming it online, cookies will make the whole process more exciting!

My other eclipse snack idea did not turn out as well as I had hoped.  After finishing, I didn’t really want to continue to experiment because I already had two pans of chocolate covered pretzels.  It’s not like a Christmas cookie recipe that I need to master so that I can use it year after year.  This eclipse is a one shot thing and I just wanted something to start a conversation with the kids about the solar corona.  I had enough chocolate covered pretzels to accomplish that task, so I didn’t stress about Pinterest-perfect pretzels.  Life’s too short! 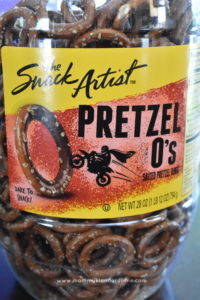 The key to my solar corona snacks are the round pretzels, which I found at Safeway. 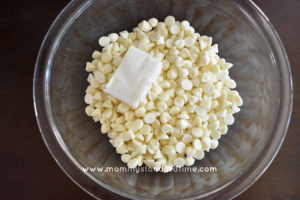 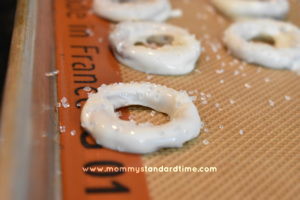 Then I dipped the pretzels in the melted white chocolate, laid them on a Silpat-lined baking sheet and sprinkled white sparkling sugar on them before the chocolate hardened.  I then put the pans in the freezer so things could get good and set. 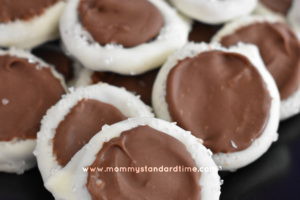 So that’s what’s on our menu for the solar eclipse.  I also grabbed a bag of Sun Chips.  What will you be snacking on?  Moon Pies?  Eclipse Mints?  Let me know in the comments below!