I was on vacation this past week and didn’t get my cancer update posted before I left, so I actually have TWO weeks to report about in this update.  Luckily, there was very little news to report from this past week since I was out of town.  The week BEFORE, though…now that’s a different story.  It started on Monday, July 24th, with my visit to the plastic surgeon.

I’m pretty sure I told you in my last update that the plastic surgeon had told me that some radiation oncologists request that volume be taken out of the expanders in most cases, but that my doctor only makes that request when it’s absolutely necessary.  What I didn’t tell you was that the plastic surgeon mentioned that this is always a physical and emotional backtrack for the patient.  When I found out that I had to have volume removed, I didn’t think it would bum me out too much.  I was wrong. 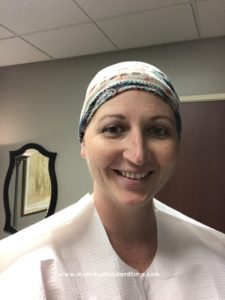 My mom and my kids accompanied me for the car ride into the city for my appointment.  They stayed outside while I ran into the building (my appointments are always pretty quick).  I knew I was seeing a new doctor since mine was out of town, but there was also a new medical assistant.  I’m sure I’ve mentioned it before, but cancer has turned me into a nervous old woman; I was a little bit thrown off by the new faces.  These people don’t know me or how much my other doctor has (or hasn’t) told me about what is happening.  I tried to ask a couple of questions, but the “substitute” doctor was explaining things in a very general way since he really didn’t know me or my case that well.  That was fine.  I just made a mental note to ask these questions again at my next appointment with my doctor. He did remind me that it is most important (more important than boob volume) to get a good angle for radiation, so I appreciated that perspective.

Then it was time to remove the fluid.  He told me that my plastic surgeon had left him instructions to remove 200 cc of volume from my left tissue expander.  Yes, you read that right.  200 cc!  When I have been receiving an average of 75 cc per visit, that represents a lot of time and muscle relaxers!  I didn’t quite have time to get over my surprise about the amount of volume being taken out before the appointment was over (I told you they were quick!).  The doctor gave me one last parting gift – – a statement that went something like this: “Let’s see what your radiation oncologist thinks.  This was just your plastic surgeon’s best guess at volume.  You might have to come back to have some more taken out.” Awesome.  Then I was left alone with my newly-deflated breast.  As I got dressed I could see the visual impact that this process had on my chest.  I was shocked by the wave of emotion that came over me.

There are so many scars and other signs of cancer on my body that I have grown to ignore.  I would even go so far as to say that I have started to embrace my new normal.  But at that point, looking down at a now-saggy boob-to-be, half the size of the boob-to-be next to it, I felt more broken than I had in a long while.  I felt dejected and disappointed.  I also felt apprehensive about how things will ever be truly fixed after radiation.  I also felt sick at the thought of having to repeat this “deflating” procedure if they still weren’t able to get a good radiation angle after my new scans.  I was grateful to have my mom and kids waiting at the car.  Having them around kept me from becoming too much of a blubbery mess, and kept my mind on something else.

On Tuesday I went to the radiation department to have my scans redone.  I found out that my fancy foam pillow holds its shape and will be reused for every appointment to help with my positioning; we had to wait until someone’s treatment was finished because my pillow was being stored in that particular radiation room.  The scans were quick and easy, especially because I didn’t have to be tattooed again.  Turns out that my “invisible” tattoo that I was trying to find was just semi-permanent ink that had washed off; my second real tattoo is on the side of my chest. It really is pretty slick to have the fancy pillow, the tattoos, and the pictures to help get me into the same position each time (they took snapshots of my positioning at my first appointment, which they referenced while getting me into position for my second scans).

Thursday brought another visit to the occupational therapist for some lymphatic “massage.” Honestly, I don’t know what the correct term is for it, but it feels like a massage.  After my treatment, she took me into another room to test the sensation in my hands.  She had these special probes made of various gauges of monofilament and would poke a finger while I had my eyes closed, then I would guess which finger she was poking.  Since a lot of sensation has already returned to my fingers since ending chemo, I was able to feel the second to thinnest monofilament, which is in the normal range.  She said that people with heavy calluses have trouble feeling the thinnest monofilament as well.  So that was good news!  She also tested my grip strength, which has never been great, but I’m sure has gotten worse since my sedentary lifestyle during surgery recovery and chemo.  Turns out that an average reading for a woman my age is around 60; I scored in the high twenties/low thirties.  I guess things can only go up from there, right??  🙂 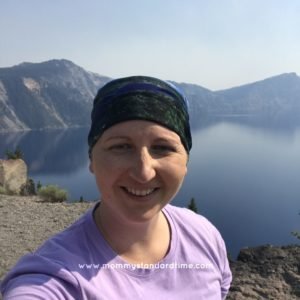 After that, things got pretty quiet where cancer is concerned because life got busy.  We had a lovely vacation in central Oregon (more on that later) and my younger brother got married.  Since we are having a heat wave around here, I decided that I was sick of having my head covered.  It’s too dang hot. 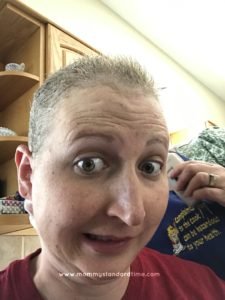 So my mom and aunt helped me dye my white peach fuzz so that I look less bald and now I can walk around with a little more confidence (and a little less sweat!). 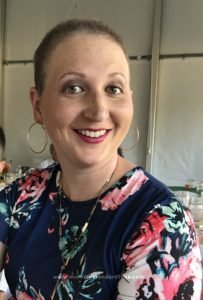 My first of 28 rounds of radiation is tomorrow and I will have radiation every day (Monday through Friday) for five and a half weeks.  Next Sunday, I’ll let you know how my first week went. Things are moving along – – onward and upward!