This was a big week; I had my first week of radiation.

Monday was a long day in the radiation oncology department.  I went to the same dressing rooms and got changed, but then they led me to a different part of the radiation wing.  It was a large room with a table and a machine coming out of the wall.  They had my fancy pillow from my CT scans which helped me get into position.  After I was on the table, the therapist joked that they were going to start sounding like Oil Can Henry’s for a second while he read off my positioning numbers from the computer and the other therapist adjusted the machine.

Then it was time for some x-rays, to determine if everything was to the radiation oncologist’s specifications, before starting the actual radiation.  They would shoot a few x-rays, then come in and draw on me with marker (see some of the marker aftermath above…it washed right off), then shoot some more x-rays. After the doctor came in and checked the x-rays and my positioning, he gave the go-ahead to start the radiation.

The actual treatment takes about five minutes.  In my case, the machine gives me eight zaps; four long zaps (about 10 seconds) and four short zaps (about 2 to 5 seconds).  The machine rotates to different spots around my body (including my upper back) every couple of zaps.  The “zaps” are just a loud buzzing noise – I feel nothing and the machine doesn’t touch me.

After the radiation treatment is over, I head back into the dressing room.  One tip that one of the radiation therapists gave me was to carry my tube of radiation lotion (Miaderm) to my appointments and put it on after treatment, before getting dressed.  I have to put it on at least three times per day, so I take advantage of any time my skin is already exposed!   When you are a mom of young kids, it is hard to find time in the middle of the day’s chaos to strip down and lotion up your chest, underarm, and back. 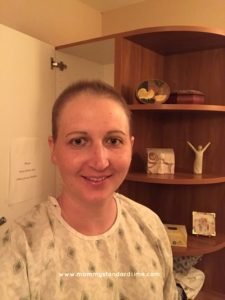 The following day I headed back for my second dose of radiation.  Without the preliminary x-rays, the appointment was a breeze.  I was in and out in less than 15 minutes.  The rest of the week passed in a similar manner.  I actually spend more time traveling to radiation than at the actual appointments.

Friday was slightly different, because I met with the radiation oncologist after my treatment.  (This will happen every Friday.)  The doctor didn’t examine my skin this time because I am not far enough into radiation for my skin to be reacting yet.  He did give me a warning that I should protect my skin from additional irritation (like sunburn) while going through radiation.

After my radiation appointment, I had my last visit with the occupational therapist.  She gave me one more lymphatic “massage” and then we talked about stretches and other things I can do to help my lymphatic system get through the shock of radiation.

A few times during this week, as I waited for my appointments or laid on a table with my boob-to-be exposed to the world, watching this huge machine rotate around me, I had an odd feeling come over me.  It is like life stands still enough, just for that moment, for my mind, heart, and body to be in the same place at the same time.  It is moments like this when I think to myself, “Wow.  This really is my life.  I am a cancer patient.”

I also have other reminders of my cancer patient status.  Let’s talk about fingernails for just a minute.

My darn fingernails are absolutely ridiculous.  I painted them a lovely shade of pink for my brother’s wedding last weekend; I bought high quality nail polish (I wanted to be sure it covered up my ugly nails) and even sprung for top coat.  I was so excited to have normal-looking nails!  However, before the wedding was over, the nail polish was already chipping.  As I looked closer, I realized that the movement of my loose nails was causing the polish to crack. Seriously?!  So the next morning I got out my nail polish remover to get rid of the chipping nonsense happening on my hands.  As I started rubbing the first fingernail, my nail was wiggling as I tried to put enough pressure on the nail to rub off the polish.  Gross and totally uncomfortable!  Needless to say, I am now sporting chipped pink fingernail polish for the foreseeable future.

One more side effect to mention today is hair loss.  Yes, the hair on my head seems to be filling in nicely at this point but other hair has continued to fall out or has not started growing back, even after stopping chemo.  My eyelashes are still completely gone and my eyebrows are down to almost nothing.  (This picture was taken a couple of weeks ago; I have lost more of my eyebrows since then.)  I have gotten better at drawing in my eyebrows, although I do have a different shape everyday (and it’s always a surprise…since I have no real skill).  Some days I look perma-surprised and some days I look like a Disney villain.  HAHA!

I don’t share these details in a “woe is me” attitude at all.  I say a prayer of gratitude for my good prognosis every day.  I know that I’m lucky to JUST have ugly fingernails and fake eyebrows to deal with at this point.  Instead, I share these details in an attempt to help anyone who might be going through similar treatment.  This is simply my experience with two possible side effects of chemo.

So there you have it.  I survived my first week of radiation.  Next week is very busy with appointments, so I will have even more to report next week.  For now, I will just keep on keepin’ on.