First of all, I’m sorry for my lame-o blogging this past week.

I have mentioned it before, but cancer has really messed with how I deal with stress.  I used to be able to fill my “plate” until it was heaping…added stress really didn’t bother me too much.  Now, even small amounts of stress make me a big ball of nerves.  It’s almost like I freeze; it’s difficult for me to focus on other things (like finishing any of my MANY partial blog posts).  I’m hoping that it’s just due to the fact that I’ve been living life in this cancer bubble for the past eight months, which has allowed me to become this nervous old woman.  I’m assuming that I will get back into the pace of my pre-cancer life, when I was able to deal with stress (or at least push it aside so that I could deal with other things).  I sure hope so.

Having said all of that, you can probably guess that it was a pretty stressful week around here, but not where cancer is concerned;  I had another routine week of radiation appointments.

After five easy rounds of radiation this week, the doctor came in to check on my skin on Friday.  He said it continues to look really good and the redness that he sees is very much expected.  My armpit is either feeling better or I am just getting used to the overall feeling of being sunburned under my arm.

We also briefly chatted about my tissue expanders post-radiation.  He said I will have the green light to talk to my plastic surgeon about my deflated expander as soon as my last treatment is over.  So I have it on my to-do list to call the plastic surgeon’s office to set up an appointment.  If you remember, I won’t be able to have my expanders swapped out for implants until six months post-radiation.  In the meantime, we will have to do something about my expander that was “deflated” for radiation.  At this point, I’m not sure what that will be – they will either be able to put the 200 cc of saline right back in or they will have to slowly add the saline like they did the first time it was expanded.  I guess I’ll find out soon enough. 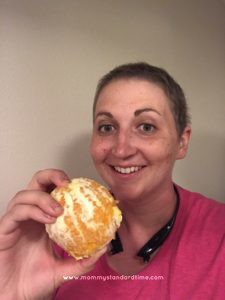 I had a huge milestone this week…I PEELED AN ORANGE!  That task was basically impossible with my loose fingernails and semi-numb fingertips.  My nails have grown out just enough that they are feeling more secure.  They are definitely not perfect (the orange was a little mangled and I had to use my teeth a few times), but things are looking up!

As you can see in the picture above, my hair is still filling in nicely.  It is growing pretty slowly, but I don’t mind now that I have enough hair to avoid wearing head covers. At this point, my hair color is still lighter than it used to be (maybe because of the remaining peach fuzz?).  The hair on the side of my head has a mind of its own (which you can also see in the picture above).  No amount of product will keep it from flipping up like that, which makes me wonder if I’m also going to have a change in texture…

So that’s my week in cancer news.  Do you know what is really exciting to me?  Someday soon I will be able to cut down my cancer updates to MONTHLY updates.  I am SOOOOOO ready for treatment to be over and for cancer to take a backseat in my life.  Yes, cancer will always have a seat in the car, unfortunately.  But I’m going to give it that sad little backwards-facing seat from those old station wagons.  Or maybe I’ll just let it drag from the bumper.