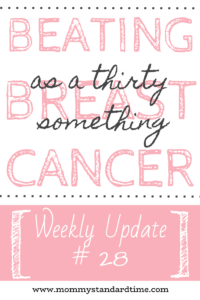 This was a surprisingly busy week in the cancer world, considering it was my first week without chemo…

On Monday I went up to the cancer center for a checkup with the oncology nurse practitioner and my Zoladex shot.  We talked about what my hormone suppressant strategy will be until my oophorectomy (ovary removal surgery).  I will be on an oral hormone suppressant even after my surgery (because there are other estrogen producers in the body besides the ovaries), but they aren’t sure if they will start me on that now or wait until after my surgery.   I’m not sure what fuels that decision or not.  For now, we are just taking it one month at a time with the Zoladex (this is the big shot to my belly).  I’m sure the nurses at the cancer center will be grateful when I am not getting this shot anymore.  Apparently they don’t give this shot very often (since it is normally used with young cancer patients who need to protect their ovaries) and, since it is a pretty significant needle and they are implanting something, it can be a pretty stressful shot to give.  The different nurses who have given it to me have ALL let out a big sigh after they finish.

On Wednesday I went back up to the cancer center for my facial.  Oh, happy day!  I have been so grateful to have this “me time” to look forward to during my treatment.  It has really helped my skin, which has been so angry and weird ever since starting chemo.

Thursday was the day of my “radiation planning” appointment.  I really had no idea what to expect, and I kept forgetting to ask what the appointment would entail.  I wasn’t sure if this would just be another chat in an exam room with the radiation oncologist, or if it was the day of my scan and tattooing.

So I got called back for my appointment by a new person I hadn’t seen before.  Turns out he is one of the radiation therapists, the people who actually do the zapping of cancer cells.  He led me to a part of the radiation wing that I hadn’t been to before.  I ended up in a dressing room with a locker for my stuff, where I stripped from the waist up and got dressed in a gown.  Now remember, I still have no idea what this appointment is going to be, but I am now assuming that I am having my scan. 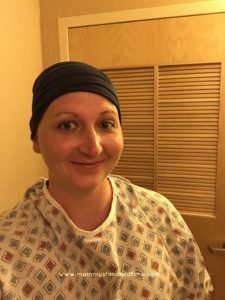 After getting dressed, I am led into a big, cold room with a CT machine.  Luckily I had just been hot flashing in the waiting room, so it was a welcome temperature.  They explain that I will be receiving two tattoos, the size of a little dot from a pen, and I sign a waiver that I understand their permanence.  They ask if I have any questions about what we will be doing, but I am at a complete loss for what to ask.  I don’t know why I was such a dweeb.  I think I have become a nervous old woman since starting cancer treatment, and the change in staff, scenery, and treatment was just too much for me to process.  So I told them that I was just along for the ride and I didn’t have any questions at that point.

So they had me lie down on the CT table, with my head on a clear plastic pillow full of foam stuff, like what you would end up with if you put packing peanuts in a blender. They were very particular about my head and hand position, and they wanted to make sure that I was in a comfortable position that I could hold.  The reason for this is that I will be recreating this position for treatment and everything has to be exactly the same.  After they had me in the right position, they did some sort of vacuuming to the pillow and it form-fitted to my arms and head to help hold everything into place.  Then they did a quick scan so the radiation oncologist could come take a look at the positioning.

After the oncologist came in, he reviewed the scan, made a slight change to my positioning, put some sort of stickers around my boob (I couldn’t turn my head to look) and then I had the “real” scan.  Once that was done, the radiation therapist put the two tattoos in my skin, one in between my boobs and one at the top of my right boob.  Sidenote:  One of my tattoos has turned out to be what I would have expected, but I can’t see the other one.  I’m not sure what that means, but we’ll find out at my next appointment.  It’s probably not going to be too big of a deal…you’ll see why in just a second.

After my scan, I got dressed and then received some skin care instruction and my appointments.  I will be starting radiation on August 7th, then I will be having radiation everyday for 5 and a half weeks.

On Friday I had a voicemail from the doctor, asking me to call him back because he had an update on my treatment.  It is pretty uncommon  for the actual oncologist to call, so I was a little bit nervous about that.  Then I noticed that I had another voicemail from the plastic surgeon’s office.  Oh man.  So I called the radiation department and the receptionist let me know that the oncologist needs to have some of the volume taken out of one of my expanders. My plastic surgeon had told me at my last appointment that this happens sometimes, but what he DIDN’T mention at the time is what this would mean for the implant process after radiation. He said my oncologist doesn’t request it unless it’s REALLY necessary, so he hadn’t expected it to happen to me.

But it did.  So I had to call my plastic surgeon back and set up an appointment to have some of the fluid removed from my left expander.  THEN, I had to call the radiation department back to schedule an appointment to repeat the scans that I had just done the day before.  That’s why I don’t think the invisible tattoo will be a big issue…they might have to make changes in that regard anyway.  So next week is going to be another busy one in the cancer world!

If you’re curious about how my body is recovering from chemo, things are going well.  My nausea is gone and I am slowly (VERY slowly) gaining back some energy.  I am shocked at how out of shape my body is!  As I start doing more because I have more energy, my joints and muscles are protesting at the sudden increase in activity.  Let’s just say that I feel much older than my 33 years!

My fingernails are still really ugly, but they are healing.  PLUS I am gaining feeling back in my fingers and toes.  I didn’t realize just how numb they had been until the sensation started returning.

Overall, things are moving in the right direction and I am SO GRATEFUL!