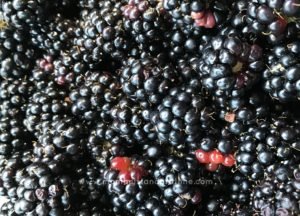 As I mentioned in the last summer bucket list update, I recently took the kids blackberry picking so that we could make some jam.

Our favorite blackberry picking spot has been torn up due to construction, so I was on the hunt for a new spot this summer.  I vaguely remembered seeing dried up blackberries on a particular walking trail late last summer, so I decided to load up the kids on a day that I was feeling well and head down to this new spot.

Unfortunately, things didn’t go all that smoothly.  First, I couldn’t find my Chacos, which baffled me since I wear them literally everywhere (seriously….best sandals ever).  So I found some old flip flops and decided they would be fine. Turns out they WEREN’T FINE; they broke as I got out of the car at the trail .  The Professor asked if we should just go home and find some other shoes, but I had a feeling that if I turned around at that point, we wouldn’t make it back to the trail that day.  So I ripped the drawstring off of a pouch of sample sunscreen that I had in my purse and tied my flip flop back together.

We were back on track.

Then I noticed that there was construction going on at THIS trail as well.  There were no cones or signs saying that the path was closed, so we kept walking.  On any other day I might have turned around, but this momma wanted some blackberries!  I had hauled my three kids down there, applied sunscreen on everyone, manhandled the stroller, and fixed my broken flip flop like Macgyver.  We were getting the dang blackberries!  So I pulled the kids close to me like a mother hen and we walked past a couple of tractors, a concrete truck, a crane, and several construction workers who were giving me the side eye.  Oh, well.

Once we made it past the little construction zone, it was time to get to work.  I had envisioned that the path would be lined with blackberry bushes and it WAS…but the blackberry bushes had all been killed off.  Dry blackberry branches were everywhere.  Luckily, the live bushes that were further back from the trail (and inaccessible to the city workers with weed killer) were reaching over the dead ones, but other people had clearly been blackberry picking recently because the few bushes we found were picked clean.  I gave Mini-Me (the noticer of EVERYTHING) the job of telling me when she saw blackberries among the other vegetation along the trail.  After a lot of walking and some precarious tip-toeing on my part, we were able to find a few berries here and there.

So on and on we walked, filling a small Rubbermaid container about halfway with berries.  I was starting to worry that we weren’t going to have enough berries for jam.  The kids were starting to lose interest, since they couldn’t really pick the berries from these precariously-located branches.  On top of all that, we were running out of trail.

We continued to walk until the pavement turned to gravel, then to dirt/sand.  My ever-faithful stroller was handling the change of terrain like a boss, but there came a point when the “trail” was about a foot wide.  We were out of the more wooded vegetation and standing in the middle of dry grass.  It was getting hot, so I told the kids it was probably time to turn around.  Then my blackberry scout said “But Mom, I see blackberries! PLEASE, can we check out those blackberries?!”  I looked at where she was pointing, about 20 feet down the trail and around a slight curve, and I was skeptical.  But I decided to give it one last try since the kids’ interest had been rekindled. 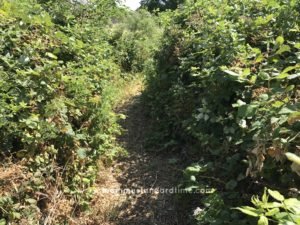 As I pushed the stroller down the trail, I was shocked to see that we were walking into a blackberry OASIS!  We found a long section of trail with WALLS of blackberry bushes on each side.  The bushes were loaded with fat, ripe berries and they were easily picked by me and the kids.  Not a scratch to be had.

As we quickly filled the rest of the containers we had brought with us, I thought to myself “Man, too bad we couldn’t have just walked straight here.  I could have saved myself a lot of trouble.”  But then, as I listened to the excited chatter of my kids who were absolutely tickled by our good fortune, I realized that I shouldn’t be thinking that way.

I realized that my kids wouldn’t have been nearly as excited for these random blackberry bushes if they hadn’t first experienced how difficult the hunt for wild blackberries can be.  It reminded me of a couple of my favorite scriptures: “It must needs be, that there is an opposition in all things”…”and they taste the bitter, that they may know to prize the good.” (Moses 6:55, 2 Nephi 2:11)

As we made our way back to the van, I kept thinking about our experience that day and how it related to our year so far.  Right now, our family is tasting the bitter.  For sure.  But once my treatment is over and we are able to press “play” on our life plans again, we will notice more readily the sweet.  We will be able to treasure the good times much more than we would have previously.

I have felt so much guilt about how my cancer has impacted our children.  My brain says I shouldn’t because it’s not my fault that I have cancer, but there are times when my heart is loaded with guilt anyway.  My little reminder from the blackberries was also a reminder that yes, even though my kids have had a rough year, they will be stronger for it.  They will know that life is hard sometimes.  They will know that they can face scary things.  They will have this cancer experience to draw on as proof of their own resilience.

They have tasted the bitter.

Now they will be able to prize the good.

3 thoughts on “A Lesson From Blackberries”