The past week was a little more eventful in the cancer world than usual.  I’ll just get right to it….

On Monday, I had a round of radiation and then went back to the cancer center later in the morning for my monthly visit to the medical oncology department.  However, instead of meeting with the nurse practitioner like I normally do, I met with the actual medical oncologist.  She checked out my chest, we talked about how I am feeling now that chemo is long gone, and we talked about next steps.  She asked when I was planning to have my ovaries removed (this question comes up every month, when they have to give me my Zoladex shot).  I told her that the plan was to have them removed during my implant surgery six months from now, so I would have one less round of general anesthesia. She looked up from her notepad and said “Doesn’t that sound like an awfully long time to wait?”  I told her that I was open to whatever the professionals decided, but if they were bumping it up from my implant surgery I would rather have it sooner than later.  She made a note to contact my OB/GYN and then I went into the chemo room for my port flush.

After my port flush it was time for my monthly shot of Zoladex.  As much as I hate the stinging of the Lidocaine, I am grateful to have that little bit of buffer from the beefy needle they use for the Zoladex.  This shot is just one more reason why I would prefer to have my ovaries removed sooner rather than later.

I went home on Monday not knowing how soon I would need to wait before my surgery.  Apparently I was more anxious about this surgery being bumped up than I thought, because I had a CRAZY dream about my ovary removal surgery on Monday night.

Tuesday was a weird day.  I went up for my usual radiation appointment, but I was greeted at the front desk with the news that the machine was down.  They were going to try and troubleshoot the problem over the phone with the repair person in Portland.  Once it was fixed, they would still have to boot up the machine, which took time.  They told me they would call me if they could squeeze me in later in the day.  So I waited around the rest of the morning and into the afternoon, wondering if I would get the call for radiation.  Eventually I got the call that they wouldn’t be able to fit me in.  Bummer.  My final round of radiation now had to wait until Friday.

Everything was fixed on Wednesday, so I was able to have my daily round of radiation.  Later that morning, I received a call from the women’s clinic, asking to schedule a pre-op appointment with my OB/GYN.  I had the option of going in later that afternoon or waiting until October 4th.  I opted to go in later that afternoon.  At that appointment, we just discussed more details about the procedure, I filled out some forms, and we set a tentative date (pending confirmation with her scheduler, who was out of the building by the time of my appointment).

I will be having a bilateral salpingo-oophorectomy (meaning that I will be having both ovaries and both Fallopian tubes removed).  This will be a same-day, laparoscopic surgery.  There will be two small incisions near my pelvic bone on each side, and then one  longer incision in my belly button.  The surgeon will insert the surgical tools through the smaller incisions, cut my tubes and ovaries, bag them up, and then remove them through the incision in my belly button.  The ovaries will then be dissected and checked for cancer.  She said that I might be a little sore afterwards because there will also be some tools that are inserted vaginally (thank goodness for anesthesia).  Apparently they also use gas to inflate my belly, making it easier to see things during surgery.  This extra gas can cause some bloating and pain post-surgery and that pain can travel up into the shoulder.  I thought that was interesting.

Overall, the recovery doesn’t sound too bad.  I will be a little bit “off” from the general anesthesia for a day or two and I can’t lift Ladybug for about a week. I’m assuming there will be some soreness at the incision sites and then the discomfort from the gas/bloating.

So the week pressed on.  Thursday was another day of radiation.  I was a little bummed that day, realizing that it should have been my last day of treatment.  But that’s okay, because it made Friday an AMAZING day (more on that in a second).  I was a nervous wreck all day Thursday because Mr. Blue Eyes was at a day of promotion interviews in Portland.  We knew he wouldn’t hear the results of the interviews until late Friday evening or Saturday morning. 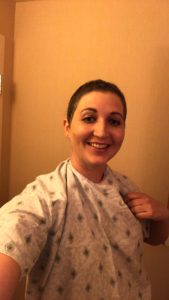 Then it was finally Friday.  My last day of radiation.  The worst of my cancer treatment was over!  My skin looked good enough that the radiation oncologist doesn’t need to see me for another six weeks.  The really burned part of my armpit has started to turn dark and peel, but my skin has done really well during radiation for the most part.  Later on Friday, the scheduler from the OB/GYN called  to let me know that I was on the surgeon’s schedule for this coming Tuesday.  After picking up the kids from school, I was feeling all sorts of relief now that radiation was done and I had my surgery on the calendar.  I thought to myself that the only thing that would make it better would be if Mr. Blue Eyes had been off that day, so we could start our celebratory dinner earlier (he normally doesn’t get home until after 6:00).  We were home for about 5 minutes when Mr. Blue Eyes surprised us by strolling in, having gotten off early to celebrate with us.  Then Mr. Blue Eyes was home for about 5 minutes himself when his phone rang, with a promotion offer.  His previous day of interviews had been a success!  I felt like my heart would burst!!!  To have radiation finished AND a promotion offer in the same day was confirmation that we are ready to move on with life.

God is good, my friends.

But it doesn’t end there.  Early the next morning, Mini-Me and I had to run to the store for a few things.  We were in a rush and quickly found what we needed.  On our way out, I saw a sweet little familiar face.  Before Ladybug was born, we had fostered a little guy with plans to adopt.  Things didn’t work out for us to adopt or continue to foster, and that little guy has been weighing on my mind for a long time.  So to see him in the store was a welcome treat in and of itself (he had been living out of town).  But then I started chatting with the women he was with and it turns out that they were his new adoptive mother and grandmother who had flown in to take him back with them across the country.  Words cannot describe the sweet closure that I was able to receive from seeing his big smile and giving him one last hug.  Chance encounter in the store?  I think not.  I repeat:  God is good.

Now my life feels like it is in fast forward.  I am headed to the hospital for surgery first thing tomorrow morning and plan on cruising real estate listings in my down time.

Onward and upward, I tell you.  Onward. And. Upward.