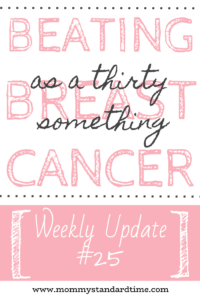 The weeks are growing longer, my friends.  I feel myself slipping into the chemo time warp, when the hours pass at a snail’s pace because I’m not feeling well.  It’s not nearly as bad as when I was having the other type of chemo (AC), but I am definitely starting to feel consistently crummy. 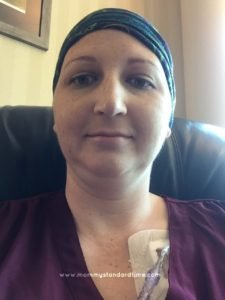 As I mentioned in yesterday’s summer bucket list update, we got up early on Monday morning in order to get back to town in time for chemo.  Luckily, the staff had been able to bump my appointment to later in the morning (I’m normally one of the first appointments of the day) so we weren’t in a huge rush.  My bloodwork, appointment, and chemo all went fine.  I fell asleep almost immediately after getting my Benadryl, mainly because I was so tired from camping.

Toward the end of my infusion, I heard the nurse calling someone that had apparently come up earlier to talk with me (but left when they saw that I was asleep).  Turns out it was one of the ladies from radiation oncology and they wanted me to stop by on my way out of the building to schedule an appointment with the radiation oncologist for later in the week.  So I took care of that on my way out.

Like the last couple of weeks, Tuesday went really well.  I don’t know if it is possible to still be a little “buzzed” from the steroids the day after chemo, but I definitely have more energy and less nausea on day two of my chemo cycle.

Wednesday was a very hard day for a few reasons.  First, I felt my usual chemo crumminess.  Then, about two hours before my appointment with the radiation oncologist, I had a fairly long migraine aura. And then it was time for my appointment. 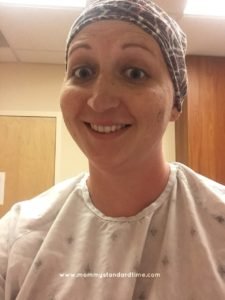 Nothing overly difficult happened at my appointment. I changed into a gown for a quick exam of my skin/incision/tissue expansion and then the doctor, my nurse navigator, and I talked a little bit about the next part of my cancer journey.  The doctor would like to extend my radiation treatment by three sessions in order to use a slightly lower frequency of radiation, which would be easier on my tissue expanders.  So that means that I will have 28 treatments instead of 25 (five and a half weeks instead of five weeks).  I will be receiving radiation in my underarm lymph node region, around the clavicle, and down the center of my chest (the internal mammary nodes).  I will also have some radiation around my incision, but there won’t be EXTRA radiation in that location, which was mentioned to me as a possibility at some point by someone on my cancer team.

I asked the doctor for a quick reminder as to why radiation is a good choice in my case, because it has been a while since the last time I met with him.  (When you have a bilateral mastectomy, aggressive dose-dense chemo, and a clean PET scan, you start to wonder about HOW aggressive you really need to be.)  Well, the doctor gave me a quick reminder.

He held up the tip of his pinkie (to the first knuckle) and said that a mass has to be at least that size in order to show up on a PET scan (billions of cells).  Then he showed me about half of that same fingertip and said that a mass of that size still contains millions of cancer cells, but wouldn’t show up on a PET scan.  He told me that, without radiation, I could be looking at a one in three recurrence rate.  In my case, radiation will be important to ensure that we have cleaned up any remaining bits of cancer cells lurking around my chest and lymph nodes.

So, one might think that I walked away from this conversation thinking, “Radiation is a powerful weapon!  I’m gonna get those stray cancer cells!  Hear me roar!”  I would like to say that was the case.  Maybe on a different day, when I wasn’t already feeling so crummy.  But on this day, that conversation with the radiation oncologist was like a slap-in-the-face reminder that cancer is SCARY!  I don’t know quite how to explain what it feels like (emotionally) to have cancer.  I don’t actively process the fact that I have cancer all the time.  I have a lot of distractions in my life to keep my mind otherwise occupied, and I think I would drive myself crazy if I let myself think about it too much.  But then I have reminders like this conversation with the radiation oncologist, when it feels like someone takes a megaphone and yells right in my face: “YOU HAVE CANCER!  REMEMBER?!”  These moments are emotionally exhausting.

So there I was on Wednesday afternoon, feeling chemo nauseous with a migraine hangover, returning from this somewhat emotionally-draining appointment.  I was able to pull it together in order to go to Mini-Me’s last softball game, but then I had to crash for the rest of the evening.  It was a rough day.

The rest of the week went relatively well.  My nausea lasted through most of the week, but some days were better than others.  My toes are still numbing up and my fingernails are still lifting.  But my peach fuzz is coming along nicely.  🙂  I just can’t wait to have my last two rounds of chemo over and done. I am getting so close!!