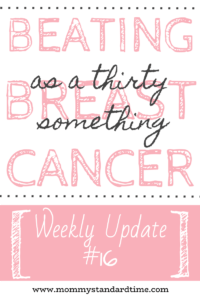 You guys…I had such an awesome week!

Monday was my first round of Taxol, the “lighter duty” chemo that I will have every week for the next twelve weeks.  After having my port needle inserted, blood drawn, and my appointment with the nurse practitioner, I took my seat in a chemo recliner and got ready for this new drug.  It’s always hard when you are trying something new and you don’t know how your body is going to react. 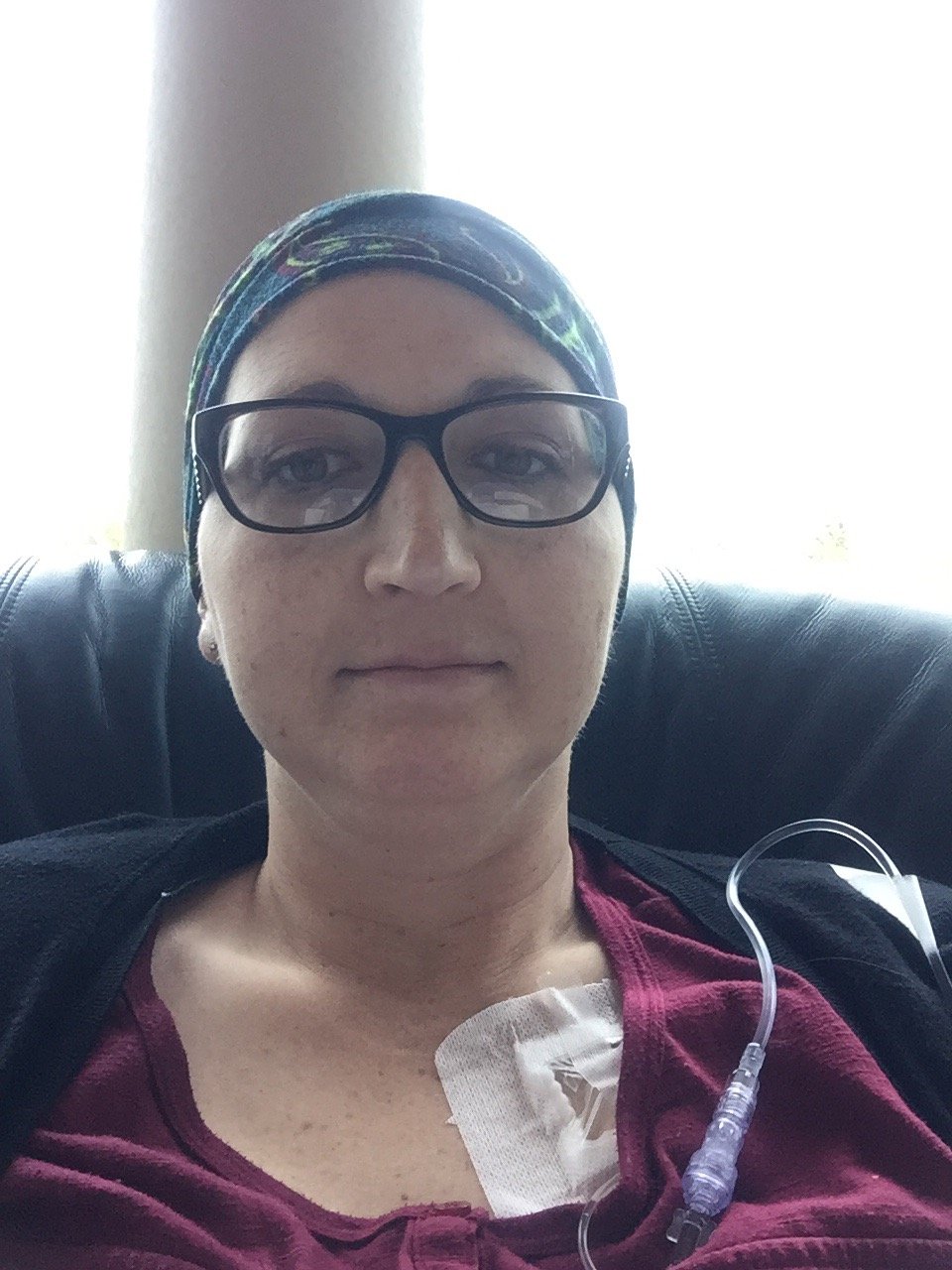 The pre-meds were a little bit different.  I still received a dose of Zofran (anti-nausea) and Dexomethasone (a corticosteroid that helps with nausea/other reactions).  However, my other pre-meds were Benadryl and Pepcid.  I’ll tell you what, getting Benadryl through a port is no joke!  I don’t normally get knocked out by Benadryl, but it made me SUPER drowsy that day.

The reason for the new pre-meds is that it is very common for the body to have an allergic reaction of some kind to the Taxol.  For that same reason, my first dose of Taxol was administered very slowly (over about three hours).  The nurse would check on me every so often and, if things were going okay, she set the IV to drip a little faster.  The goal is that I will eventually receive my dose of Taxol over one hour, but that won’t be for another few treatments.

Earlier in my appointment, while I was waiting for my pre-meds to cycle through the IV, the nurse took me to a private room for my Zoladex shot.  To give you a quick refresher, Zoladex is the shot that goes into my stomach once a month.  It is a large core needle that implants this “worm” of medicine under my skin that dissolves over the course of the month.  The medicine puts my ovaries to sleep, which is ideal for two reasons:  First, it can protect the ovaries in case I’m not done having kids.  This is not a fool-proof plan (harvesting and freezing eggs in addition would have been a good back-up), but it is better than nothing.  Second, taking my ovaries out of the picture for a while limits the amount of estrogen being produced by my body.  We know that my particular cancer cells LOVE estrogen – they tested positive for estrogen receptors at 95% – so if there were any lingering cancer cells after my surgery, we didn’t want them feeding off estrogen while the chemo was working hard to kill them.

Every time I have a Zoladex shot, I am asked if I have made a decision about ovary removal.  In some cases, this can change the decision to use Zoladex.  For example, if a woman knows that she is done having kids and she is not estrogen receptor positive, there wouldn’t really be much reason to use Zoladex.  This is an extremely personal decision for women in my situation, so the staff don’t push or give an opinion one way or the other.  When I was recently asked again about ovary removal, I finally asked my nurse practitioner for an up-front opinion and she said that in my situation, even though I’m not BRCA positive, it would still be something I should strongly consider.  A few weeks ago, she suggested that I talk with my OB/GYN about the other implications of ovary removal.  That appointment came this week, but I’ll get to that in a second.

After another LONG day at the cancer center, I went home a groggy mess.  I tried to take a quick snooze before the kids came home from school, but that didn’t last too long.  But here’s the wonderful thing…I had NO NAUSEA.  The only side effect I noticed that first night was that my arms became very tingly from my fingertips to my elbows.  It was the pins-and-needles feeling when your arm falls asleep and then starts waking back up…but it never stops!  It was hard for me to go to sleep with the tingling arms that first night, but I eventually did (and had a great night’s sleep, by the way.  No more coughing!).  When I woke up, the tingling was gone and there was still NO NAUSEA.  There was very little fatigue.  My bowels were moving beautifully.  My cold symptoms were nearly non-existent.  When my dad asked me how I was feeling later that morning, I used the word “great”. 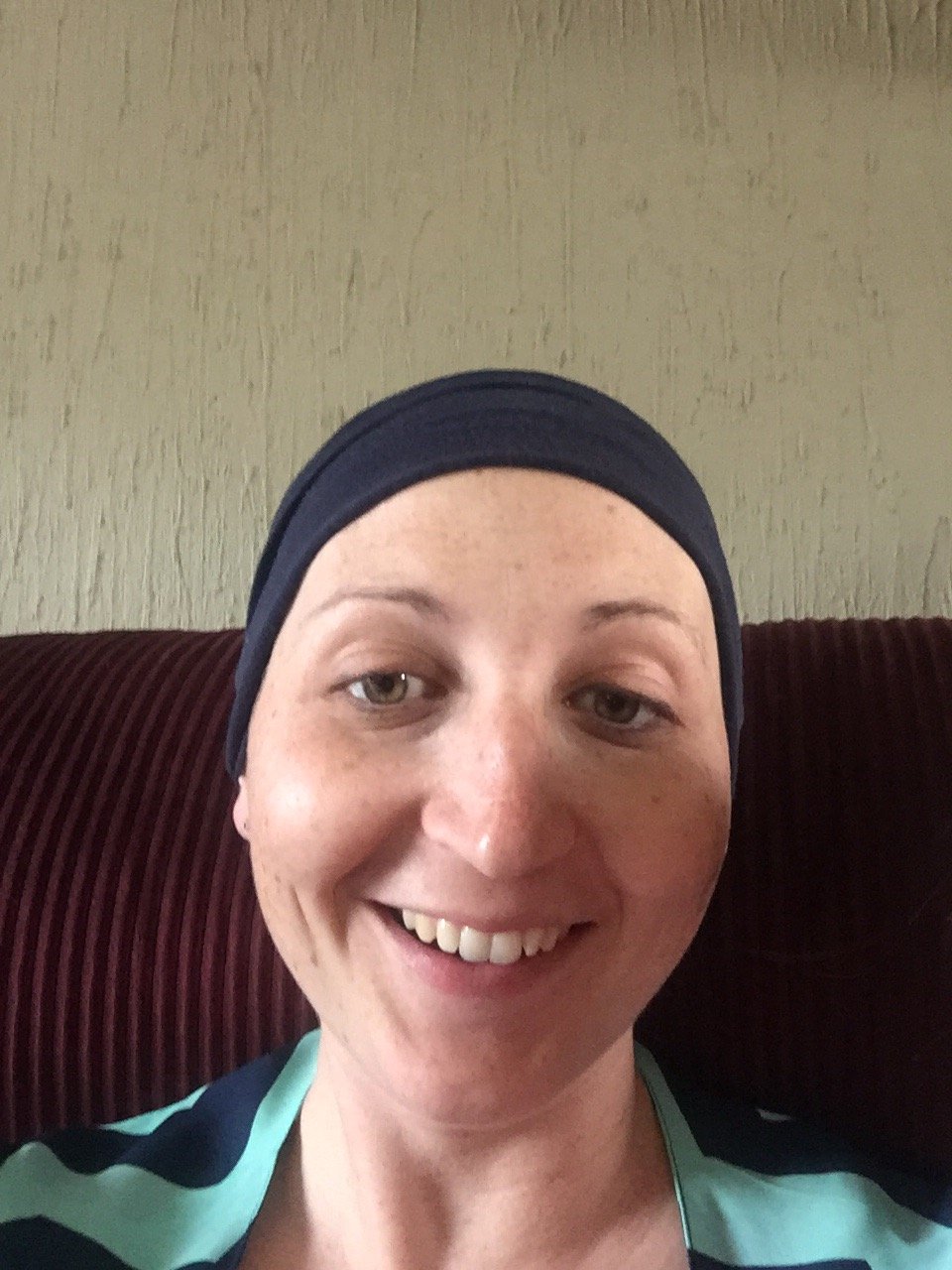 Then things only got better.  Wednesday was the day of my complimentary monthly facial at the cancer center.  Since I knew what to expect this time, I was completely relaxed and the whole experience was blissful.  She was able to take care of a lot of the crazy dry skin that has been trying to slough off (a side effect I mentioned last week).

That brings us to Friday, the day of my appointment with the OB/GYN.  She asked me how I was doing on Zoladex and we discussed my hot flashes and very occasional night sweats.  She was pleased to hear that my (temporary) menopausal symptoms from Zoladex were not impacting my life very much.  She said that some women are MISERABLE on Zoladex, so they don’t recommend removing the ovaries and triggering menopause for real.  Since I don’t seem to be having too many symptoms, it is a positive sign that I might not have horrible menopausal symptoms if I had my ovaries removed.

I don’t know about you, but I am all about keeping original plumbing whenever possible, which means that all of this talk about removing my ovaries has had me debating with myself. A lot.  Although it has been a very heart-wrenching and personal decision that I won’t discuss too much on this blog, we have decided that our journey of having biologically-born children is complete.  So my main concern with the ovary removal is whether there are any other reasons why I might want to keep my original plumbing intact.  The OB/GYN said that, other than the early menopause, the only other thing I would need to watch for is early bone deterioration.  There really is no reason why I would want to keep my ovaries if I am done having kids and I’m at peace with the idea of menopause and extra calcium pills.

We discussed what the surgery would look like.  It is a same-day, laproscopic procedure where they insert the tools through two small incisions near my hips and remove the ovaries and fallopian tubes through an incision in my belly button.  She thinks that it would be a good idea to have the surgery at the same time I receive my breast implants in order to limit my anesthesia exposure.  If the plastic surgeon is on board, and I decide to actually go through with it, that will be the plan.  Since the name of the game from the beginning of this journey has been to be as aggressive as possible, I am leaning toward having the procedure.  It removes another potential cancer site from my body and starves any estrogen-hungry cancer cells that might want to come back.

So there is my week in a nutshell.  I continued to feel good through the weekend.  It’s like I’m a whole new woman!  I know that there is a strong possibility of cumulative side effects, particularly fatigue, since I am receiving Taxol weekly over twelve weeks, but I will take these good weeks as they come!  Speaking of side effects, I will leave you with one more picture.  My crazy gray tongue.  Look closely and you will see that my tongue has gray splotches going up each side. Isn’t that lovely??  My own version of animal print. 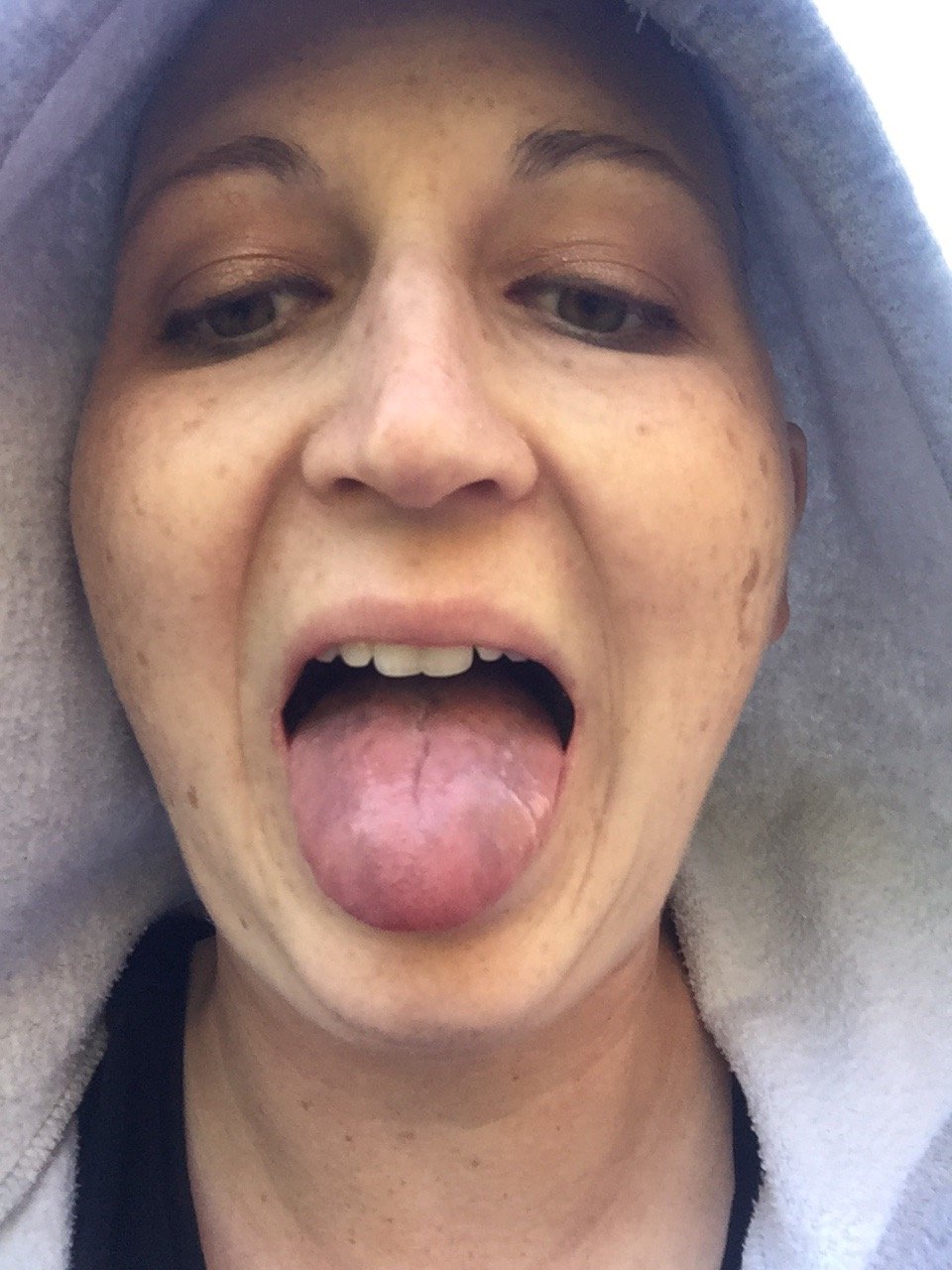