Just about one year ago, I was diagnosed with breast cancer.  I have been blogging about my battle with cancer ever since, first with weekly updates, and now with monthly highlights.  If you need to catch up on my story, please check out this page for the chronological list of posts.

In the weeks since my last update, I haven’t had a whole lot going on in the world of cancer appointments.  The one major thing that happened this month was my first visit with my new oncologist.  Most of our discussion surrounded how I have been feeling lately, so I will start by telling you about the current state of my recovering body and then I’ll sum up what the doctor had to say about it. 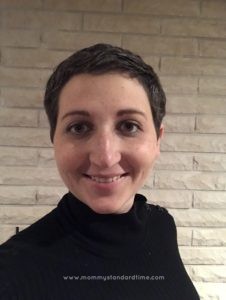 HAIR – My hair is continuing to grow in nicely, but it is still a lighter color than it was before cancer.  It is also a tad more textured right now (but that could just be due to the fact that we live in a very rainy area now).  I had my SECOND hair cut at the barber shop this past month.  I am hopeful that a couple of more trims will put my hair in the right ratio for growing it out.  I have grown out a pixie a couple of times, and there is definitely a science to letting it grow out without it looking like a mullet.

NAILS – My fingernails are still a little sad.  The majority of them have grown out to the point of looking pretty much normal (but they are really wavy).  I have a couple of nails that I have accidentally bent back (ouch!), so they are taking longer to grow out and reattach.  When ALL of my nails were loose, I did a much better job of wearing gloves when I thought I might get gunk under them.  Now, I keep forgetting about the one or two loose ones and end up with dirty, gross fingernails after raking leaves, etc.

CHEST – I have been having quite a bit of soreness in my chest area, and I’m not sure why.  Sleeping has become a little bit uncomfortable, but some days are definitely better than others.  Honestly, worse than the soreness is the ITCHING on my chest.  My (fake) boobs are numb, but somehow they itch.  I don’t know if it is actual itchiness from my nerves reactivating themselves, or if it is phantom itching (which is a thing, apparently).  All I know is that once I start itching, the only thing that relieves it is to go to sleep.  Imagine having a horrible itch on the tip of your nose, but you have to try and scratch it while wearing oven mitts.  I have discovered that it is impossible to relieve an itch on skin that can’t feel scratching.

My chest is also still a little bit sore from my port removal.  It feels SO MUCH BETTER to have it gone, but occasionally Ladybug will nuzzle her head right onto the spot where my port was and it is SORE, as if the port was still there.  Apparently there is still some healing going on under the surface.

FATIGUE – I think this is the area that has been bothering me almost as much as my itchy fake boobs.  Before moving into our new home almost a month ago, I had my parents, my brother, and Mr. Blue Eyes all under the same roof.  I had gotten used to having seamless help around for moments when I just needed to sit down and rest, or nights when I wasn’t feeling up for cooking.  Now, not only do I not have my parents and brother around, but Mr. Blue Eyes is gone for 12, almost 13, hours a day.  I am running the show all day every day, from breakfast to nearly-bedtime. Don’t get me wrong, I am so grateful for the opportunity to stay home while the kids are young and I know that Mr. Blue Eyes’ long hours are making that possible.  I’m just SO. DANG. TIRED.  The fatigue is more than just being “mom tired”, which is why I know it is still treatment-related.  I am able to get a lot done during the day and, overall, I feel quite well.  But there comes a point in the afternoon/evening when I hit a brick wall of exhaustion, a wall that wasn’t there before cancer.  And it bums me out sometimes.

EMOTION – Which leads right into how I’m doing emotionally.  I’ll be real with you all…being a cancer survivor is crazy stuff.  The tiniest thing will go weird with my body and my mind immediately goes to cancer.  A new mole on my leg?  Maybe it’s cancer.  My underarms are sore?  Maybe my lymph nodes are full of cancer.  I know that’s crazy, so I don’t dwell on it, but it happens.  As soon as thoughts of recurrence come into my head, I swish them away, but those thoughts leave a heavy feeling of dread on my chest and in my throat for a while.  Then there are the emotional ups and downs of…..

MENOPAUSE – Yep, I’m going through “the change” since I had my ovaries removed.  Hot flashes, mood swings, the works.  I can’t take hormone replacement to help with symptoms, though.  In fact, I am taking a daily hormone suppressant.  Luckily, my symptoms aren’t horrible.  I could really do without the irritability, though.  I think what bothers me most about my occasional (yet drastic) irritability is that it does not reflect my true feelings of gratitude to be alive and my satisfaction with life.

I’m sure there are some of you who read all of this and think “Geez, Stephanie.  You’re cancer free.  Enough with the updates and complaining about your lingering symptoms.”  To be honest, I’d almost agree with you.  HOWEVER, my main reason for doing these updates is to share my story with other fighters and survivors.  As a survivor myself, I am curious how long the treatment fatigue lasts, so when I read cancer blogs I am watching for updates like this one.

In fact, my lingering cancer issues are a pretty small part of my day-to-day living.  I’m happy as a clam most days.  Life is good!  Putting my aches, pains, and worries all together into one monthly update makes everything sound like a bigger deal than it is in reality. 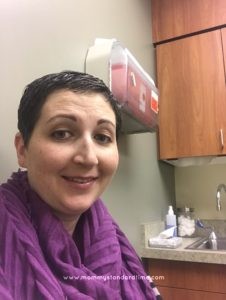 On to my doctor’s visit…The cancer clinic is a small area of a pretty large hospital facility.  All of the staff that I encountered were super friendly, including the oncologist.  She is a younger gal with elementary-school-aged kids, like me.  In fact, she reminded me of an awesome lady from my home town, so it was easy to talk with her.  We chatted about my lingering symptoms (which I shared above) and she assured me that everything sounded very normal for cancer recovery.  She is interested in having me talk with my plastic surgeon about my chest soreness, and if he doesn’t think it is related to my tissue expanders, she will want to refer me to a physical therapist to see if that helps.

When I asked for a recommendation for an acupuncturist in town, she asked me what my goals were for acupuncture (since that would impact her recommendation).  This got me talking about the whole “treatment is over….I feel a little bit like a sitting duck” thing.  I mentioned that staff at my previous cancer center said that acupuncture could be a good idea.  My new oncologist said that acupuncture would be good for lingering pain or neuropathy (I still have my one sad little numb toe), but there is data to suggest that other things are stronger tools in fighting recurrence.  She said that my little pill that I take every night (the hormone suppressant) is technically ACTIVELY fighting cancer, just in a different way than chemo.  We also talked about the usual – – diet, exercise, etc.

Then the visit was over and life moved on.  I will go back to see her in three months.  I’ve come to the conclusion that cancer will always be a hurdle of some kind in my life.  For a while it was a LARGE hurdle that put our family’s entire life plan on hold for almost a year, it has also been a hurdle in planning future vacations around upcoming surgery, but now it is just an occasional hurdle in my plans for the day.  Eventually the hurdle will just become a blip in my yearly radar.  Slowly, but surely, cancer will become a much smaller part of my life.  But it will always be part of my story.