In December of 2016 I was diagnosed with Stage IIB breast cancer.  After a bilateral mastectomy, chemotherapy, and radiation therapy, I am now cancer free and blogging, once a month, about my continued recovery (as long as there’s some news to share).  To read my whole cancer story in chronological order, click here.

Happy March, everyone!  I didn’t do a post last month because I really didn’t have a lot to share, so I’m covering two months in one.

My life as a cancer survivor continues to move forward, but the frequent reminders that my body has still not fully recovered from treatment are becoming more frustrating. As I have told a few of my friends and family:  My pre-cancer ambition has returned and I am filling my time with new activities, volunteer work, and other responsibilities.  The unfortunate thing is that, while my brain is saying “Yay!  Cancer treatment is over.  Go, go, go!!”, my body is saying “You’re still recovering!  No, no, no”.

So I am left with finding a balance between pushing myself to be active while giving my body a little grace.  To sum it all up:  I.  Am.  Exhausted.

What makes it more difficult is the emotional baggage that comes with being a cancer survivor.  Every morning I put those suitcases down so that I can pick up the day-to-day responsibilities of my life, but then something happens that causes me to pick up my emotional cancer baggage and then I’m left trying to balance everything like one of those awkward cartoon characters.  Plus, since cancer treatment is “over” for me, I feel like people don’t really want to hear about my woes.   (This article that I found online describes it pretty well.) 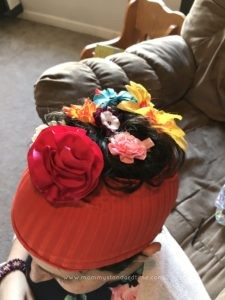 By all appearances, you wouldn’t be able to tell that I’m a cancer survivor.  My short hairstyle looks deliberate (the girls have been excited that I have enough hair for them to “style”), my fingernails FINALLY look normal, my skin is healthy-ish, my tissue expanders are full.  But there is still a lot that lurks below the surface.

So….what’s triggering me to pick up my emotional baggage?  It’s watching for “new bruises, aches, or pains.”  This is the advice that I was given as part of my survivorship plan and it has proven to be a challenge for me.  I need to be in tune with my body, but I also have to keep myself from going crazy with each new symptom.

Here are a few examples: 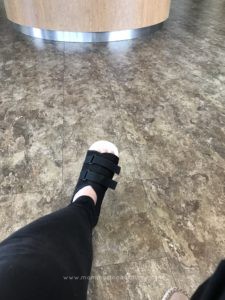 Seriously, you guys.  I feel like a hypochondriac even as I type this list.  I am working so hard at improving my health (watching what I eat, exercising, getting plenty of rest, drinking lots of water), but, ultimately, my body is still broken.  It doesn’t take long before I’m wondering if my body is still recovering from when cancer treatment broke it, or if it’s because my body is breaking due to the cancer returning.  Putting this in the black-and-white of a blog post makes it sound like I am a traumatized cancer survivor cowering in the corner, analyzing my body for each new ache and pain.  I’m really not.  I am a busy mother-of-three and wife who is working hard to put cancer behind me.  Unfortunately, I am discovering that it’s easier said than done.  I have been shocked at how these little moments have rocked my otherwise-stable emotional world. 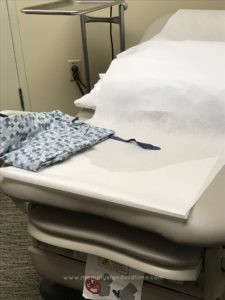 It was in this nervous frame of mind that I had my oncology check-up this past week.  It was an extremely hard day.  I really wasn’t prepared for how difficult it was going to be.  I was in tears off and on all morning leading up to the appointment because the worry over my new bruises, aches, and pains caused my brain to go to some scary places.  I knew I needed to share these things with my doctor, but I was embarrassed about the prospect of sounding like a hypochondriac.

I didn’t need to worry about that, though.  The staff at the oncology department were absolutely lovely.  My appointment was with the nurse practitioner (she switches off with the oncologist) and she put my mind at ease for most of my concerns.  She let me know that my bruises, my heart weirdness, and my lymph node tenderness were probably nothing to worry about, but she did it in a way that didn’t make me feel silly for asking.

She did leave the room for a few minutes to consult with the oncologist about the pain in my ribs.  They decided that, to be safe, they wanted me to have an x-ray to make sure that there wasn’t any cancer in my bones (since I still have my tissue expanders, they couldn’t do an MRI).  Cue even bigger feelings (although I held it together until I got home).  The nurse practitioner reassured me several times that they really didn’t expect to see anything.  This was mainly just to rule things out.

I had the x-ray done later that day and I got a phone call that evening.  There was no cancer in my bones BUT….

….they DID find a fairly substantial kidney stone.

{I haven’t talked to a doctor about this new discovery, but I am pretty sure the kidney stone is partly due to my new calcium supplement regimen.}

So there you have it.  I am now one of the “lucky” few who know that they have a kidney stone before they’re symptomatic.  Just peachy.  At least I’m nervous about something other than cancer.  For now.