For the past year, I have been blogging about my life as a breast cancer fighter and, now, survivor.  If you need to catch up on my story, please check out this page for the chronological list of posts.

I can’t believe that another month has passed!  And yes, there was a little bit of action in my cancer world in December.

I went to the plastic surgeon toward the end of December with the hopes of getting my left tissue expander completely refilled.  {If you don’t remember, I had to have 200 cc of fluid removed from my left tissue expander in order for the radiation oncologist to get a good angle for my radiation treatment.}  At my last appointment, the plastic surgeon stopped adding fluid a little earlier than he had planned because he said things were feeling pretty tight.  That’s why I had planned on returning in December – – to get the last of the fluid added back. 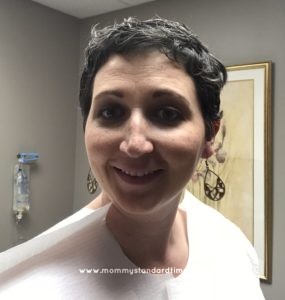 Anyway, I arrived at the plastic surgeon’s office, went back to the expansion room, and got into my paper gown.  The assistant pulled out all of the things needed for an expansion, then I waited for the doctor.  When the plastic surgeon got into the room, he took a look at my boobs-to-be and said they were looking pretty tight.  Especially the side that was radiated.  He opted not to put in any additional fluid, which disappointed me.  But, as it turns out, I was only 25 cc shy of my pre-radiation volume.  The difference that I am seeing between my two boobs-to-be is more due to differences in shape from the incisions and scar tissue.  The plastic surgeon says that he will be able to go in and clean up some of that scar tissue.  He also told me that he thinks he’ll have a good pocket to work with for the implants (I guess that’s what they call the area they have to work with after taking out the tissue expander); that he will be able to put some additional volume in towards the center so that I have more natural-looking cleavage.  I know I joke about my cannonballs, but that’s really what they look like right now; no real cleavage, just two big bumps on my chest.  He said the implants will be larger than the tissue expanders.

Another thing we discussed was the chest pain that I have been having.  Remember, in last month’s update, that my oncologist wanted me to run it past my plastic surgeon at my next appointment…so I did.  He said that what I’m describing is super common, especially in women who have full and tight tissue expanders.  He said that the outward pressure is what we notice most, but the tissue expanders are also putting pressure on the bone structure behind them.  This can cause some bone pain (which is what I’m feeling…random, sharp pains in my rib cage).  He said that some women who have their tissue expanders in for a LONG time have actually had their ribcage curve inward as a result of all the pressure.  Yikes!

He wants me to make sure that I am massaging my boobs-to-be, especially around the incisions, in order to help break up the scar tissue.  But let me just say, this task is actually really hard for me.  It is SO weird to rub a part of my body that is essentially numb.  I can feel pressure, but that’s about it.  So it’s really difficult for me to gauge if I’m even making a difference.  Plus, I really just don’t like the feeling of pushing against these super-hard cannonballs.

After our discussion, he took me to the surgery scheduler to discuss a date for my pre-op and surgery.  It’s getting REAL, you guys!  I will have my pre-op appointment in mid-April and will then go in for my implants on April 26th.  He said, since I have already done the hard work of tissue expanders, the surgery and recovery should actually be pretty smooth.

Enough about my boobs-to-be.  I thought I’d also show you how my hair and nails are continuing to move past cancer-patient status: 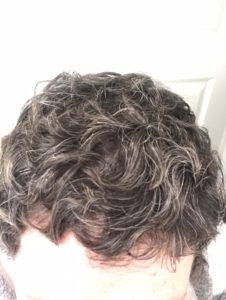 My hair has grown quite a bit; I have had two trims at the barbershop to clean things up (without taking off length at the top), and I am definitely due for a THIRD visit.  My hair has more texture and curl to it now than it did before I lost it (that could also be due to the wet climate where we live now).  It seriously has a mind of its own, but it is still too short for me to try and tame it with a flat iron.  So, I just go with it. 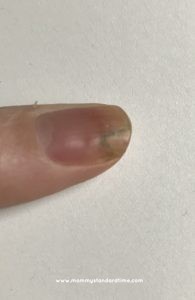 My fingernails are ALMOST completely back to normal.  My thumbnails have both had trouble reattaching in certain spots (and also one other finger on my left hand), so they still look a little weird. It didn’t help matters when I was doing my makeup the other day; The Professor startled me right when I was putting my mascara wand back in the tube and I jammed it under my already-loose thumbnail.  So, not only did I make the reattaching take longer, I also jammed black goo underneath the nail.  Yuck!

Emotionally, I am doing relatively well as a cancer survivor.  I definitely have my moments (thanks, early menopause), but there are many more good moments than bad.  I think the thing that still hits me the hardest is the grief over not carrying any more babies.  Don’t get me wrong, I am super excited for all the ladies around me who are rocking the whole child-bearing thing, but there are times when I see a maternity photo shoot, or a diaper commercial, or Chip and Joanna’s pregnancy announcement, and I am sad.

Yes, my brain tells myself “at least I was able to carry babies at all,” “I have three healthy children,” “I am lucky”, and those things are TRUE! There is just something about having my hand forced into this situation by cancer that leaves me feeling a little short-changed (and bummed about it).

But, wait, Stephanie….didn’t you ELECT to have your ovaries removed?  Didn’t you OPT OUT of freezing your eggs?

Yes, I CHOSE those things….but when looking at the facts in front of me and praying about the right decision to keep me healthy for the children I already have, I felt like there really wasn’t much of a choice in the matter at all.  When all is said and done, I’m after more time.  The decisions that I made will keep my cancer-friendly hormones in check and will hopefully keep me healthy for the long haul.  Being a little sad about my situation does not mean that I am not at peace with my decisions.

So, there you have it.  Another month as a cancer survivor.  Here’s to many, many more!