As I share recipes on the blog, you might notice that many of them have been modified to be gluten free. I do not have Celiac disease, nor do I have a gluten sensitivity that has been diagnosed by a medical professional.

But I am on a gluten-free diet.  Here’s why: 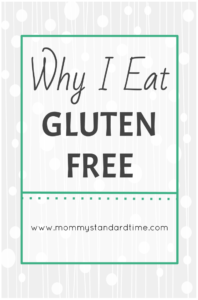 Since my early adulthood, I have experienced migraine with aura. I distinctly remember my first aura. It was very alarming since I had no idea what was going on. I called my mom in a panic and she said, “It sounds like what your dad gets sometimes.” Sure enough, when I compared notes with my dad I found out that I was experiencing the same type of aura as my dad and my brother. Luckily, our migraines do not manifest with horrible pain; mostly the temporary blindness from the aura followed by a car-sick feeling, headache, and some mental fogginess.

(Here is a link to a video that honestly made me cry the first time I watched it.  It shows family members participating in migraine simulations to see what their loved ones experience.  My auras are a mix between what the man is seeing and what the mom in the yellow sweater is seeing at the very end of the video.)

Fast forward a few years and I got into the rhythm of my migraines. They followed a fairly predictable cycle of one or two per month (surprise, surprise). It got to the point that I would notice the early warning signs. I even got a slight reprieve from my migraine cycle during my pregnancies.

Then things went a little nutso.

I started experiencing aura multiple times per week, the mental fogginess was almost constant, my ears would ring, my vision would darken at random times, I had trouble speaking, and my hands would occasionally tremor to the point of dropping things. Due to the sudden increase in symptoms, I had extensive neurological testing done to rule out brain tumors and MS. I tried several medications with little success, went on a migraine elimination diet, and consulted three neurologists, including a headache specialist at a very large metropolitan hospital. Long story short, my journey for answers was fruitless and I was left feeling like a hypochondriac.  And I was BUMMED. Majorly bummed.

As I was discussing my difficulty with a friend, she asked me if I had ever tried a gluten-free diet. Since I have a niece and nephew with diagnosed Celiac disease, I responded with “no, I’m not sensitive to gluten. It doesn’t bother my stomach.” Since that was one of my niece’s and nephew’s main symptoms, my knowledge regarding gluten sensitivity symptoms was limited to that scope. After my response, my friend told me about her daughter who has gluten ataxia. This was the first time that I had heard about the neurological effects that gluten can have. I began to research more about the link between gluten and neurological symptoms. After finding an article about the link between gluten sensitivity and MSG sensitivity (I knew I was sensitive to MSG from previous experiences), I figured it was worth a try.

I decided to try a gluten-free diet and also eliminate free glutamates (such as MSG), but since I was several thousand dollars in the hole from my little jaunt with three neurologists, I didn’t commit to gluten-free baking with fancy flours or buying gluten-free products. I just cut out bread and pasta (my two favorite things) cold turkey. After two months, I was very hungry but I was shocked when I looked at the calendar and realized how long it had been since my last aura. I am now approaching the three-year mark of eating gluten-free and I have had less than five auras in that time. (In all of those instances, I can pinpoint what I had eaten to cause the aura.) The other neurological symptoms are gone as well. GONE.

I know that people draw their own conclusions when they hear that someone is on a gluten-free diet, so I wanted to give you just a few more facts about me and my diet:

– I do not identify myself as gluten sensitive or gluten intolerant. I have never had it confirmed with a medical professional. If anyone asks, I just tell them that following a gluten-free diet helps with my migraines. Who knows? It might be something else entirely that causes my symptoms and it just happens to be found solely in foods containing gluten.

– I am not a conspiracy theorist who thinks we’re all being slowly poisoned. (Although I sure sound like one when I am asked what foods I avoid on my diet.)  Yes, I know first-hand that food labeling leaves much to be desired. I find it frustrating that I have to avoid all foods that contain “natural flavors” on the label because I can’t trust what those “natural flavors” are. But I’m not going to shame anyone about their food choices or go on rants about the food industry. I eat the way I eat so that my head doesn’t hurt. That’s it.

– Even though they are gluten-free and do not contain free glutamates, the recipes I will share on this blog are not super healthy. I am not a health nut (although I secretly aspire to be one, as long as health nuts can still eat butter and cheese). I have found replacements for nearly all of my pre-gluten-free-diet junk foods that do not contain free glutamates. Needless to say, I am no longer hungry on this diet.

– Although I follow a fairly strict gluten-free diet, I have experimented with things like cross-contamination at restaurants and regular cornstarch. I know what my body can tolerate. If you see me using something in a recipe that a person with Celiac would never use, it’s okay. It doesn’t mean that I don’t know; it just means that I’ve experimented with it and found it to be okay for me.

– My diet does not change my gratitude for (or support of) wheat farmers; they are the bomb diggety. We are a bread-loving family who live in wheat country. My family only joins me in my diet when I refuse to boil two different pots of pasta.

So there you have it.  That’s why I eat the way I do.  I don’t love it.  In fact, I have even cried while dishing out fluffy hand-tossed pizza for my family while my hockey-puck gluten-free pizza was baking in the oven (but in my defense, I was pregnant at the time).

When all is said and done, I will take spongy, flavorless, gluten-free bread over migraines.