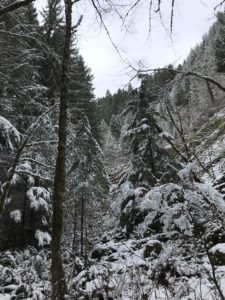 Just about a month ago, Mr. Blue Eyes and I were gifted with a pretty rare opportunity:  A kid-free weekend.

My parents were missing our kids, and our kids were missing my parents (it is hard to go from living with someone 24/7 to living two hours away).  So my folks decided that, over the long Presidents’ Day weekend, they would take our kids for three days of fun.  It was an added bonus that Mr. Blue Eyes and I were going to be celebrating our 12th wedding anniversary that weekend.

Unfortunately, Mr. Blue Eyes couldn’t get the whole weekend off, so we only had one full day together.  We woke up that morning with plans for some outdoor fun, but I was feeling pretty crummy; I had recently broken my toe and had overdone it the previous day.  My poor foot was THROBBING. After a lazy morning with my foot elevated, watching a surprise snow storm work its magic outside, we decided to venture out and go for a drive to scope out some possible hikes for when the weather improved this spring.  I was bummed that I wasn’t feeling up for a real hike, but was still looking forward to a long drive with the hubby.

I had one particular hike in mind that I wanted to scope out, so I punched it into my phone and we started following the directions.  After about an hour of driving, I realized that the destination on the map didn’t match up with a different map that I had seen on the Forest Service’s website, so I did my best to reroute us. 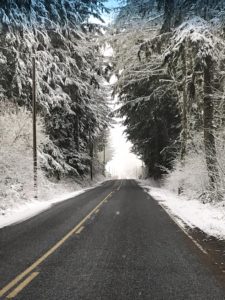 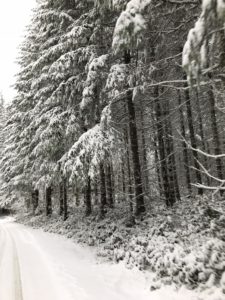 Eventually we made it to a gate and couldn’t go any farther up the mountain, so we turned around and headed back down.  On the way, I told Mr. Blue Eyes to pull over because I had seen a bunch of cars parked at what looked like a trail head.  Turns out, this trail head was a road and, from the ruts in the snow, it looked to be pretty heavily traveled, so we decided to see where it went.

And drove some more.

The road started resembling more of a narrow trail than a road.

Hikers were coming up.  We were driving down.  Cars were driving up.  I was getting confused.  Were we invading a hiking trail?  Was this a road?

Finally, we saw a young couple who had parked their car on a turnout and were starting their hike.  We pulled over and asked them if this was the particular hike I had been looking for.  They said “You mean Abiqua Falls?”  I said “No, but that sounds interesting.  Where is that?”  They told us that we could continue to drive down until we couldn’t drive any farther and we would find a trail head for a short hike to an awesome waterfall.  We asked them if they wanted to just hop into the bed of our pickup truck and show us where it was.  Apparently we didn’t look like serial killers, so they hopped into the back of the truck and we kept driving down this trail/road. 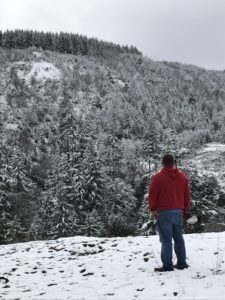 Once we got there, I realized that we wouldn’t be able to see the falls from the road.  Our new guides said that it was a short, but steep hike (“but there are ropes!”).  My dear husband’s blue eyes lit up like it was Christmas – – he was excited for this adventure.  I couldn’t resist…I was curious, too.  So we followed this couple down a “trail” that should have really been reserved for mountain goats.  It was wet, it was snowy, it was painful (my poor toe!).  But it was also exhilarating.  I was pushing my overweight, cancer-patient body to its limit and enjoying one of my favorite pre-cancer activities.  I was on an adventure with my sweetheart of twelve years. 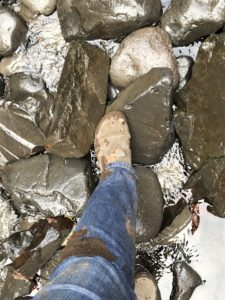 The other couple pointed us in the right direction and then left us to our date.  (I’m thinking of it that way and NOT that they just got tired of waiting for me…a thirty-something trapped in an out-of-shape menopausal body.) Anyway, if I hadn’t already been winded from our hike, the view when we finally made it to the waterfall would have taken my breath away. 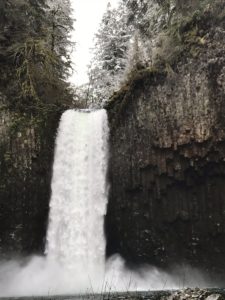 It.  Was. Beautiful.  My sad little cell phone pictures really don’t do it justice.

We spent some time chatting, taking pictures, and walking around the waterfall area.  Then it was time to hike back up.  I would be lying if I said that I hadn’t been dreading it.  Luckily, our makeshift tour guides had left the waterfall before we did and had found an easier trail back up the hill.  They were sweet enough to wait at the top and call down to us from the easier trail head, letting us know they had found a better way. 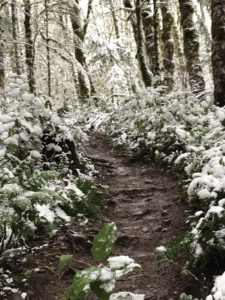 I have never hiked in the snow before, but I think I’ve found a new favorite activity!  Words can’t describe the peaceful quiet of a snow-covered forest.  We were just high enough in the mountain to have a blanket of snow covering the vegetation, but just low enough in elevation that the snow hadn’t accumulated on the trail.

As fun as it was to have our little anniversary adventure, just the two of us, we definitely wished that the kids had been able to experience this hike as well.  We frequently found ourselves saying things like “Wouldn’t The Professor LOVE these rock formations?!” or “Mini-Me would love climbing on these logs.”  I don’t know about you, but I find it so hard to experience fun things without the kids…especially when I know it’s something they would have loved.

But this time around, I really enjoyed sharing this snow-kissed day with Mr. Blue Eyes.  I was ridiculously sore the next few days and I’m sure it set me back in terms of my broken toe recovery, but it was worth it.

Do you have any awesome anniversary memories?  I’d love to hear about them in the comments below!