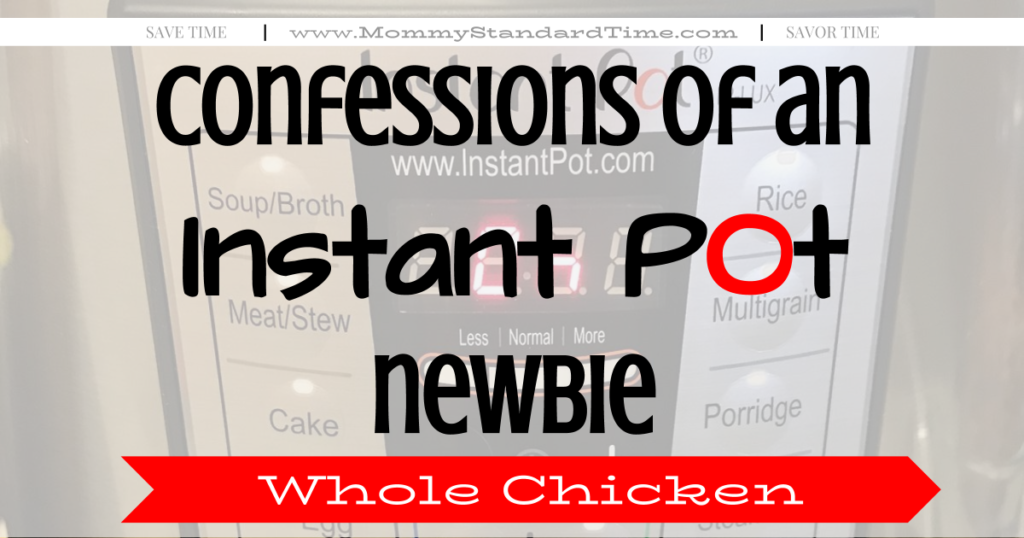 I bought an Instant Pot last month and I am documenting the good, the bad, and the ugly as I learn how to use a pressure cooker (without blowing up my kitchen)…

One of my major weaknesses in the kitchen comes when I am trying out something new.  When a recipe has a gazillion adaptations on Pinterest, I have a major issue with choosing ONE to try and sticking to it.  My technique is more along the lines of “scroll through about five of the versions, check out the similarities, pick what I like among the differences, and hope for a win”.

Cooking a whole chicken in the Instant Pot was no different.  But it was NOT a win.

As I scanned a ton of different methods for cooking a whole chicken in the Instant Pot, there were some common themes:

Sounded easy enough.  So I got to work.

I cleaned and prepped the chicken, covering it with salt, pepper, garlic powder, thyme, and onion powder.  Since I only had half of a red onion on hand, I didn’t stuff it inside the chicken, but I put it in the broth under the trivet.  Hmmm….there was some logic there at the time. 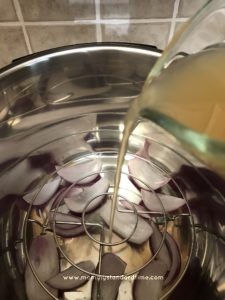 While we’re talking about “Stephanie Logic” (it’s totally a thing), I decided against the whole saute step.  While reading a few recipes where it was encouraged, I noticed that they also said things like “the skin will never be CRISP” and “you will be discarding the skin because it won’t be crispy enough to eat.”  I’m after quick and easy, so if there is no real point to browning the skin except for presentation, I don’t mind if my chicken doesn’t have a pretty tan. 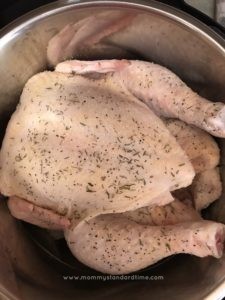 So in the pot it went (it barely fit since it was slightly over six pounds) and I set it on manual (high pressure) for 40 minutes.  I was nervous about it being large, so I did six minutes per pound plus four more minutes for good measure (where the 4 came from, I’m not sure.  More Stephanie Logic).  The cook time ended up being in the range of 6 – 7 minutes per pound, so I figured I was safe.

BUT….nothing could prepare me for the horrors that I saw when I lifted the lid of the Instant Pot. 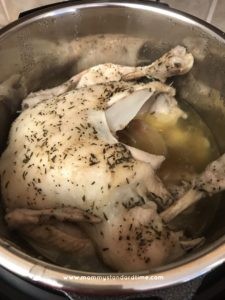 Not only did my chicken NOT have a tan (no surprise there), it looked like it had been living in a jar of goo, in a bunker in the middle of the desert just waiting for its chance to lash out at the scientist keeping it confined (Independence Day reference, anyone?).   #justcallmeWillSmith  Seriously, though, look closely.  That white beak thing in the center is NOT onion….that shows you how far the meat has pulled away from the carcass.  See the sad little leg bones with no meat on them?  Ugh.

So I got the poor bird out of the pot, which was a challenge because the whole thing was falling apart.  I slid the now-gelatinous skin off the chicken and cut a few pieces of breast meat for the kids because I KNEW that they wouldn’t eat the meat if they saw where it had come from.

We all sat down for dinner and gave it a try.

The chicken was SQUEAKY.  How is that even possible?!  It was definitely overcooked, but since it was overcooked surrounded by steam and liquid, it had this really weird texture and felt gross on my teeth.  After one bite, I knew the only way I could eat it would be to shred it and disguise it in the rice on my plate.  Luckily I had made my yummy copycat chicken rice-a-roni as a side dish, so we didn’t go hungry. (Find that recipe here) 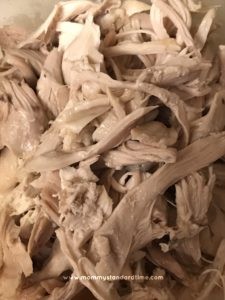 I still couldn’t give up on this sad chicken, though.  (Food waste makes me crazy.)  So I shredded the rest of the chicken and hid it in a casserole the following night.  THAT tasted totally fine.

I know I probably made a bunch of mistakes that, if fixed, would have given me better results.  (Please…PLEASE…leave me a comment with your tips!)  But even if this whole process had gone perfectly, I would probably not use the Instant Pot as my whole-chicken-cooking method of choice.  I’m going to stick with the Traeger and here’s why:

Oh, my friends…I wanted this to work SO BADLY.  I thought it would be a great option for when the weather is crummy and I don’t feel like going outside and firing up the Traeger.  As of right now, I don’t think I can cook a whole chicken in the Instant Pot again.  Maybe on a day when I am cooking up a bunch of freezer meals and I am using the chicken ONLY for casseroles.  But for just eating it off the bone?? I will stick with the Traeger.

Want to see how I cook my chicken on the Traeger?  Check out this post.

Now it’s YOUR turn.  Have you ever cooked a whole chicken in a pressure cooker?  What did you think?  Should I give it another try?  What should I do differently???