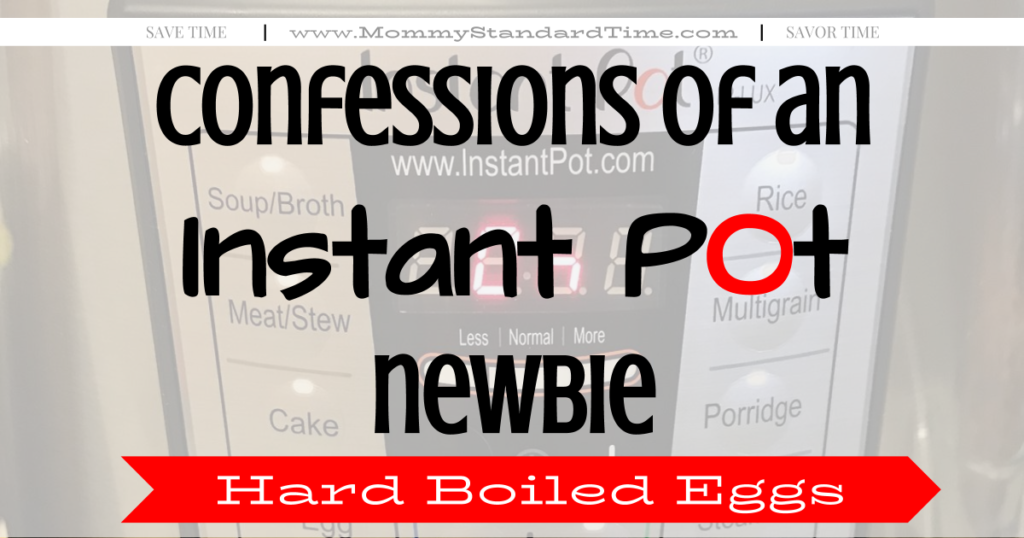 I bought an Instant Pot last month and I am documenting the good, the bad, and the ugly as I learn how to use a pressure cooker (without blowing up my kitchen)…

When I posted on Facebook that I had found a great deal on an Instant Pot and asked for recipe ideas, I received a tip that said hard boiled eggs would be a great food to try.

Now, I am not a fan of eggs.  At all.  But Mr. Blue Eyes and Mini-Me LOVE them!  I normally have Mr. Blue Eyes prepare and peel the eggs when I’m not around so that I don’t have to deal with the smell.  Because, seriously, who likes to stand there peeling little bits of shell off of a slimy, cooked egg while the kitchen quickly fills with egg smell?  Not this gal!  Nope. Nope. Nope.

So I was intrigued when an awesome reader shared that eggs cooked in an Instant Pot are super easy to peel.  I figured that it was worth a try because, really, I can’t avoid dealing with hard boiled eggs the rest of my life.  I am ridiculous.

So here’s how it went:

Yes.  This is how things started.  It’s like a sign of good luck to drop an egg on the floor when you’re cooking, right? 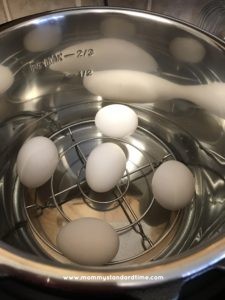 Anyway, I straddled the egg mess on the floor while I put the trivet into the bottom of my 6-quart Instant Pot along with one cup of water. Then I placed 5 {unbroken} eggs on the trivet. (Sidenote:  If you want to cook a BUNCH of eggs at once, Amazon has handy little wire racks that stack so you can cook 12 eggs at once.) 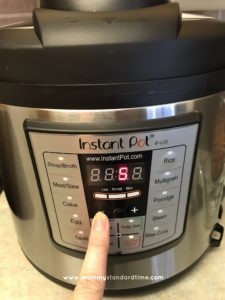 After getting the lid locked into place and the valve set to “sealing”, I hit the “manual” button and then adjusted the time to 5 minutes.

Once the pressure built and the cooking started (which only took a few minutes since there was so little water to heat, but we all know I’m a little impatient), I listened for the chime to tell me that the five minutes of cooking time had passed while I cleaned up my egg mess on the floor.

Then I left the pot under pressure on “Keep Warm” mode for an additional five minutes.  One cool thing about the Instant Pot is that it keeps track of the amount of time it has been on “Keep Warm” mode.  This is handy for recipes like this one where you have to keep the food in the pot for a certain amount of time after the cooking time is up.  While I was waiting, I prepared an ice bath. 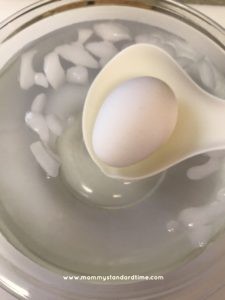 After I switched the valve to “venting” and the drop valve indicated that enough pressure had been released, I removed the lid and transferred the hot eggs to the ice bath. The little ladle thing that comes with the Instant Pot is perfect for this job.

I must admit…by this point I am thinking that this seems to be a lot of work for hard boiled eggs.  I mean, I haven’t made too many hard boiled eggs in my life because I avoid them like the plague, but even I know that boiling eggs on the stove isn’t too complicated.

Then the magic happened. 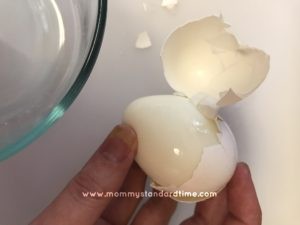 It was time to peel the eggs.  I gave a little tap around the midsection of the egg, pulled on each side, and the shell literally came off in two large pieces.

What is this sorcery?!

I thought that maybe it was a fluke and tried the next egg.  It did the EXACT SAME THING.  Say WHAT?!  I literally had all of the eggs peeled and put in a sealed container in less than 30 seconds.  LONG before my kitchen could fill with egg smell.  And, for those of you who like hard boiled eggs, you might be interested in whether or not these eggs even tasted good.  The answer to that question had to come from both Mini-Me and Mr. Blue Eyes, and they said that the eggs were great. 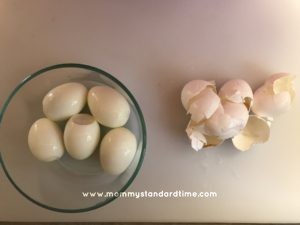 Ladies and gentlemen….I am SOLD.  Even if my other Instant Pot adventures fail miserably, to be able to cook and peel hard boiled eggs for my family like a grown woman, without gagging, is a total game changer.  Money. Well. Spent.  However, I will still be on the hunt for more awesome uses for my Instant Pot so that I don’t have a $57 glorified egg cooker taking up space in my cupboard.

Leave me a comment below if there’s something else you think I should try!

1 thought on “Confessions of an Instant Pot Newbie – Eggs”