I recently bought an Instant Pot and I am documenting the good, the bad, and the ugly as I learn how to use a pressure cooker (without blowing up my kitchen)…Click here to see what I’ve been up to so far.

Were you scared for the next installment of my Instant Pot series after the horrors of my last post?

There’s no need to fear, this week’s experiment was a win. 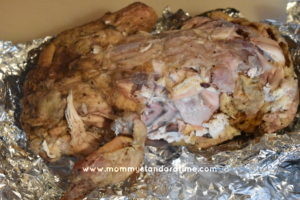 After enjoying two whole chickens that we cooked on the Traeger (it’s going to take a while for me to get over my pressure-cooked-whole-chicken fiasco), I wanted to use the carcasses to make broth.  To be honest, I didn’t even think of the Instant Pot at first.  I normally make broth in the slow cooker and let it simmer all day, but on this particular day I was out running errands all morning and forgot to get the bones in the crock pot.  I also didn’t have time to simmer it on the stove top because we were going to be in and out throughout the afternoon (one of THOSE days).  But I really had my heart set on chicken and rice soup.  So, at that point, I looked at my Instant Pot and thought “I wonder…” 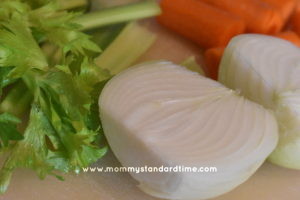 As it turns out, LOTS of people use their Instant Pots to make broth.  So I did the usual “Stephanie” thing and scanned five recipes on Pinterest before making my own combination of the recipes and winging it. I seriously can’t follow one recipe from beginning to end.  I think life would be so much simpler if I could! 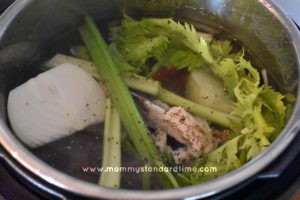 I put one chicken carcass in my Instant Pot, added some roughly-chopped celery, carrots, and onions, covered it all with water, and added some seasonings (I stuck with salt, pepper, and garlic). 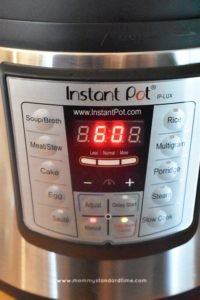 After closing the lid and switching the steam valve to sealing, I set the pressure cooker for one hour on manual mode. 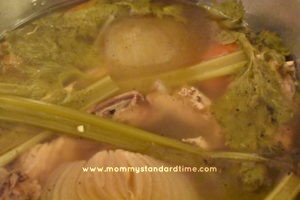 When time was up I released the pressure and lifted the lid.  I’ll tell you what, it was as if I had been simmering that carcass ALL DAY.  The broth was DELICIOUS.  (Just make sure to strain it first so you don’t have any chicken bone surprises.) 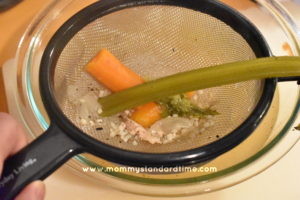 In fact, I turned right around and put the other carcass in the Instant Pot for another batch while I used the first batch to make my soup on the stove.  (Next time, I’ll try keeping the broth in the Instant Pot after removing the bones, adding my soup ingredients and seeing what the pressure cooker can do for my soup.)

After letting the extra broth cool, I split it up into various containers and popped them into the freezer.  My little cups of homemade broth have already come in handy MANY times.  In fact, it’s almost time for me to make another batch.

Do YOU use your Instant Pot to make broth?