As I’m sure you could all guess from my breast cancer story, Christmas holds some pretty heavy memories for me now.  I was interested to see how my “big feelings” from last Christmas would factor into our celebrations this year.  (Honestly, I was probably worried more than interested.)

I was pleasantly surprised by the fact that I really didn’t have too many bad memories that were triggered by this year’s celebrations.  I think it’s due to the fact that life with littles is all-around wild and crazy no matter what else we have going on.  Due to that fact, we were able to make some new memories that, over time, should help dull the memories of last year’s difficult Christmas.  Here are some examples:

Ever since Mr. Blue Eyes and I have been married, we have had a tradition of celebrating Christmas Eve in the town where we live (with the local family that was around) and then traveling to our out-of-town family on Christmas day.  This has been very convenient since the bulk of our family members still live in our two home towns and we have always lived in one or the other.  Since moving to a new home that is a good drive from either of our home towns, we had to change up our tradition.

The plan was to drive up to Mr. Blue Eyes’ parents’ home and spend the 23rd and most of the 24th at their house.  We would then drive back to our home on Christmas Eve, stopping at my parents’ house on the way through to have dinner and open some presents with them.  Then, for the first time in our married life, we would spend ALL of Christmas Day at our own home with just our little family.

Then we saw the weather forecast, and the winter weather that had originally been set to occur after our travel days, was inching closer and closer to Christmas.  I started to get a little nervous but the kids were thrilled by the possibility of a white Christmas.  We drove to Mr. Blue Eyes’ home town as the snow was starting.  It was a beautiful drive and the roads were still clear, so the snow was just enough to get us in the Christmas spirit.

After spending the 23rd playing in the snow and hanging out with relatives, we woke up on the 24th to a VERY bad forecast for road conditions.  There would be snow AND freezing rain throughout the day on the route we would be taking back to our house.  We decided to adjust our plans and leave towards home as soon as we were packed up that morning in an attempt to beat the winter weather.  But the snow started as we drove to my parents’ house to pick up our dog and presents.  It was pouring snow when we arrived at their house. Mr. Blue Eyes and I made the decision that, since the precipitation had started, there would be no point in disappointing our kids and missing Christmas Eve dinner in an attempt to beat the storm.  The storm was already here.

We decided to go to church with my parents and then, afterwards, they were kind enough to bump forward the Christmas Eve meal and festivities so that we could eat and open presents before getting started on what we knew would be a very long drive home.

As expected, the drive was white-knuckle…going an average of 30 mph on the interstate down to a crawl once we hit the ice in the Portland area.  Honestly, I was terrified.  I can handle most winter weather and don’t mind driving in snow.  Freezing rain and sheets of ice are a totally different story.  Our normally 2-hour drive (one hour and 45 minutes with no traffic) took us four hours that night.  Major props to Mr. Blue Eyes for getting us home safely!

Once we made it home, I ran inside to get a cozy fire started so that we could open our matching Christmas PJs in a tender moment straight out of a Hallmark Christmas movie.

This was the first fire that I had started in the fireplace of our new home.  I figured that the flue was open because I had noticed steam coming from our chimney every morning recently (I assumed that meant warm air from the house was escaping through the open flue).  Anyway, I didn’t think to confirm that idea because we had just survived one of the scariest drives I’ve ever had and I was rushing to move our evening along and get the kids to bed (it was 10:00pm by this point).

Long story short, the flue WASN’T open.  After starting the fire, I was rushing around the house trying to help Mr. Blue Eyes get things brought in from the van.  Just as I was noticing the smoke pouring into our house, the smoke detectors noticed as well. So Mr. Blue Eyes and I had to start alternating between opening windows, hitting the “hush” buttons on the smoke detectors (that only “hush” for like a minute), keeping the dog (who is afraid of loud noises) from bolting out the door as we continued to unload the car, AND trying to figure out how to open the flue with large flames blocking the way.

We were finally able to get the flue open and the smoke VERY gradually left the house.  We had our cozy fire, which was nice because the house was now FREEZING from having every door and window open.  We were able to get everyone settled down and into our matching PJs. AND we made a funny Christmas memory.

Don’t worry…not all of our Christmas memories are crazy this year.

One of my favorite things was watching Ladybug discover the snow when we woke up on Christmas Eve morning.  She looked out the window and, ever the singer, starting reciting Christmas carols to herself as she stared in awe at the snow.  She wasn’t sure what was going on with the weather, but it sure reminded her of a song.  She said it to me conversationally, rather than singing: “Oh what fun is ride open sleigh”.

It was so fun to watch Ladybug enjoy Christmas as a toddler.  I think my favorite part was watching her during the Nativity that we always do at my parents’ house on Christmas Eve (Christmas Eve afternoon this year).  She came crying to me after they dressed her up as an angel and slowly stripped off the various pieces of her outfit before the Nativity had even started.  She sat on my lap as the kids started filing into the room and seemed very interested in what they were doing.  She ran into the kitchen (where the kids were getting ready for their turn in the program) to check things out.  Ladybug had obviously connected the dots because she came back, grabbed the outfit off my lap, and tried draping the pieces onto herself.

Just about that time, she noticed Baby Jesus in the manger on the floor.  Again, you could see the gears turning.  She dropped her angel outfit to the floor and looked at her favorite doll wrapped in swaddling clothes, then at her cousin who was dressed as Mary and kneeling next to the manger.  Ladybug was clearly skeptical about Mary’s ability to take care of her favorite doll because she slowly inched closer and closer to the manger.  I was waiting for her to just grab the baby and run.  All of a sudden, she did run out of the room, but she didn’t take the baby.  She returned a couple of minutes later with the doll’s sippy cup.  I was right…Ladybug didn’t think Mary knew how to take care of Baby Jesus as well as she could, so the manger had a toy sippy cup full of fake OJ for the rest of the Nativity.

I have also enjoyed watching The Professor and Mini-Me develop new interests and talents.  The Professor asked for a chess set for Christmas, so I figured he wanted to learn.  Turns out, he had already learned how to play during free time at school.  Needless to say, I have lost several games of chess over the past few days.  Mini-Me has enjoyed her new roller skates and I have enjoyed hearing her clomping around the kitchen as she hones her technique.  I also tried my hand at a new skill…I made Pavlova for the first time and it was delicious! 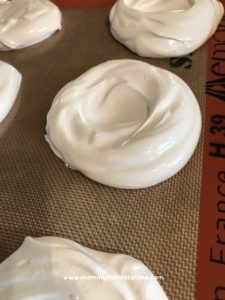 I also found out that my mind is not what it once was.  Blame chemo…blame the busy holiday season…I don’t know.  But I bought a gift for the WRONG couple in one of our family gift exchanges.  I felt so bad!

Overall, it has been a very pleasant couple of days, even with the crazy weather and smoky house.  I am grateful that our family is slowly adding to our pile of Christmas memories…good, bad, and in between.  I am even more grateful that I am here to make the memories with them.

How was your Christmas?  What was your favorite memory from this year?